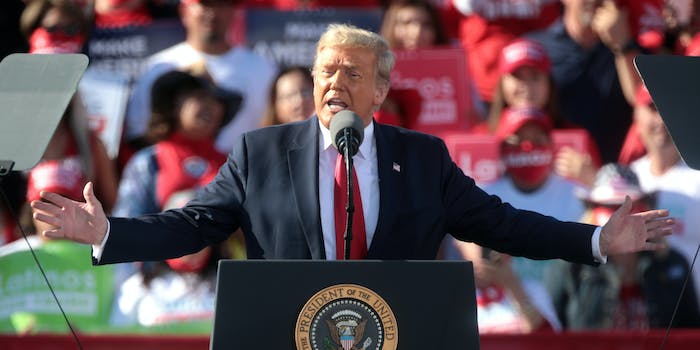 Trump will stay banned from Facebook for at least 2 years

The announcement came in response to the Oversight Board's ruling in May.

Former President Donald Trump will be banned from Facebook for two years, the social media giant said on Friday. After those two years are up, they will reevaluate to see if the “risk to public safety has receded.”

The announcement was a response to the company’s quasi-independent Oversight Board, which upheld Facebook’s decision to ban Trump following his posts amid the Capitol riots, but criticized the indefinite nature of the ban. The Oversight Board had asked Facebook review the indefinite ban and “either impose a time-limited suspension or account deletion.”

At the time of the ban, CEO Mark Zuckerberg said that he felt that “the risks of allowing the President to continue to use our service during this period are simply too great.”

The two-year ban will be retroactive to the date of his initial suspension on Jan. 7. The two-year ban would be over in January 2023. Trump has reportedly been mulling running for president again in the 2024 election.

Nick Clegg, Facebook’s vice president of global affairs, said in a blog post on Thursday that at the end of the suspension the company would “look to experts to assess whether the risk to public safety has receded.”

“We will evaluate external factors, including instances of violence, restrictions on peaceful assembly and other markers of civil unrest. If we determine that there is still a serious risk to public safety, we will extend the restriction for a set period of time and continue to re-evaluate until that risk has receded,” Clegg wrote.

Once Trump’s ban is “eventually lifted,” Clegg said there would be a set of sanctions that would happen to Trump’s account if he “commits further violations.”