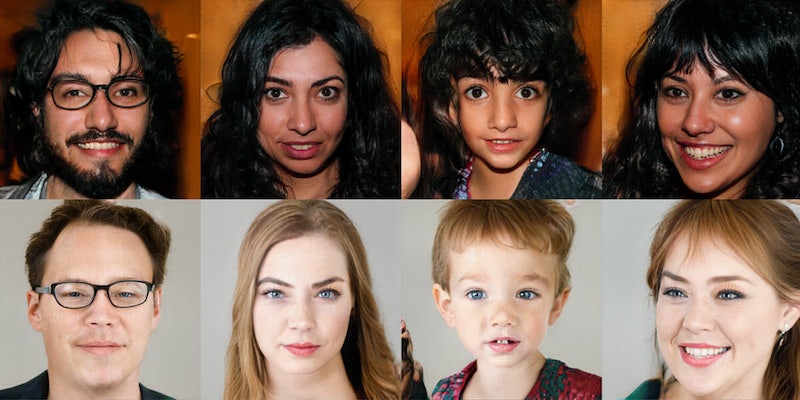 New website will endlessly generate fake faces thanks to AI

The creator hopes to bring public awareness to power of AI.

A new website that utilizes artificial intelligence can endlessly generate the faces of people who don’t actually exist.

The AI works by analyzing countless photos of the human face in order to generate realistic ones of its own. While creating such images initially required advanced computer hardware and specific knowledge, the process is now widely available thanks to the site.

Philip Wang, a software engineer at Uber and creator of the website, told Motherboard that the new service is designed to “dream up a random face every two seconds.”

“Most people do not understand how good AIs will be at synthesizing images in the future,” Wang said.

Concerns have already been raised about the technology’s potential use by trolls and sock puppets looking to conceal their true identity online.

Others have noted though that the algorithm, while highly impressive, is still far from perfect.

Aric Toler, a researcher at Bellingcat, was able to spot several discrepancies in some of the generated photos.

This random face generator could make life more difficult for digital researchers, but there are a few dead giveaways with some of these fake faces. Look at the ears, teeth, and necks especially for some freak show entries.https://t.co/qV2r2ron18 pic.twitter.com/6JVopjygly

Wang, who says that artificial intelligence can also be used to create fake “cats, cars, and bedrooms,” is sticking with human faces for now.

“Faces are most salient to our cognition, so I’ve decided to put that specific pre-trained model up,” Wang said.

The techniques used are similar to those implemented while creating deepfakes, videos in which a person’s face can be superimposed onto the body of another.

Technologies have even been developed to fake a person’s voice, making it sound as if they said something they never actually did.