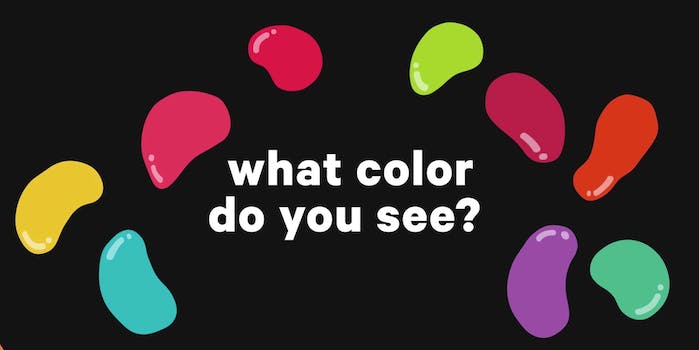 If The Dress were a game, it would be Specimen

If the Dress was a game, it would be this.

The internet has an obsession with perception and new mobile game Specimen is here to feed into it.

Think back a few months—eons in Internet time—to the madness spawned by “the Dress.” The entire incident swept up the web because people perceive color differently. Specimen, a free game for iOS, taps into the idea that color isn’t as absolute as we think it is and turns it into a competition.

The concept of the game is about as simple as can be. Presented as a petri dish containing amorphous blobs, players are tasked with picking the droplet that is the same color as the background. As you rack up your score by picking the right hues, you’re also revealing to the game what your eyes can perceive.

Game creator Erica Gorochow told the Creator’s Project that she hopes the game will provide insight into interesting trends and correlations.

“The data collected from its users will hopefully shed light on various color perception patterns in society at large,” she said. “For example, ‘Is there any indication that the US sees color differently than China or Germany or Brazil? Is there any specific color dominance or weakness when you compare men and women?'”

Of course, Specimen is still as much a game as it is a science experiment, and it picks up where Kuku Kube left off in terms of gamifying our obsession with color perception. In that sense, Specimen is far more complete, offering power ups and boosters that eliminate excess shades and improve odds of answering correctly.

Just like Kuku Kube, the Dress, and all of the other color-centric obsessions the internet latches on to, Specimen is equally as rewarding as it is frustrating and will have you staring at a screen for longer than is probably healthy.