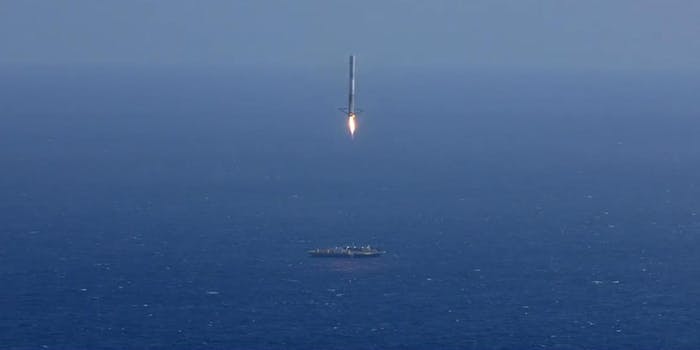 SpaceX rocket landing didn’t go according to plan, but the video is amazing

Landing a reusable rocket on a moving barge will soon be a reality. For now, watch this totally awesome explosion.

Yesterday, SpaceX made its second attempt to land a first-stage CRS rocket on a barge, in order to deem it reusable. Footage of the attempt was scarce at the time, but today SpaceX has given us a better look at exactly how things went down:

The resulting explosion is a sadly glorious sight, but even more amazing is the fact that SpaceX managed to hit a moving barge with a 200-foot rocket that was flying backwards. While this particular rocket will not be reusable (because, as you saw, it exploded), the results have the company very hopeful for the future.

Ascent successful. Dragon enroute to Space Station. Rocket landed on droneship, but too hard for survival.

@elonmusk progress is the concept.

As far as hitting targets that aren’t small moving barges in the ocean, SpaceX has been pretty good at that for almost a year now.