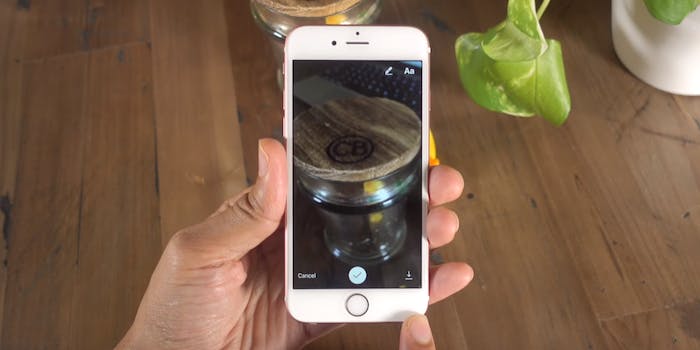 The social network has not provided a timeline for the new feature.

Instagram is working hard to shed its title of Snapchat-clone. The company is now testing a stop-motion camera just a few weeks after releasing the unsettling Halloween-inspired Superzoom camera.

First discovered by the Verge, Stop Motion lets you snap a series of photos that Instagram turns into a choppy GIF. The new feature is currently being testing so only a select group of users can access it.

Sadly, no one at the Daily Dot was able to use the feature, however, Twitter user @JuiceboxCA made an excellent demonstration featuring a BB-8. Check it out:

Instagram is testing a new stop-motion feature. Here's BB-8 adorably showing us how it works. pic.twitter.com/mryhSr62QL

As you can see, the “Stop-Motion” icon sits just under the shutter button in Stories next to the new Superzoom camera.

All you need to do is snap a photo of an object, then move the object, snap another, and move it again, and so on. Then tap “done,” and use whatever tools you want to add things like stickers or text. Note, you can’t edit each individual photo. Once you’re finished touching things up, the photo set will be combined into a GIF and posted into your story.

Inspired by the quirky animation technique, stop-motion makes an inanimate object appear as if it’s moving on its own. Here are a couple more examples.

Instagram hasn’t officially announced the feature and will only do so if it’s well-received by users during testing. From what I’ve seen, stop-motion seems like a really cool tool for creatives, so I hope we see a full rollout soon.