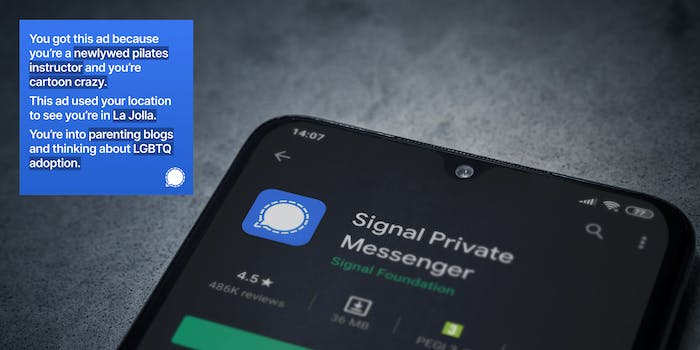 Signal, the popular encrypted messaging app, tried to highlight the data collection practices of Facebook and Instagram by making an ad campaign that used data the social media giant had collected on users.

But before the ads could run, they were rejected by Facebook, Signal says.

In a blog post on Tuesday, the messaging app outlined how it intended to create an ad campaign on Instagram that would “show you the personal data that Facebook collects about you and sells access to.”

The ads would “simply display some of the information collected about the viewer which the advertising platform uses,” the messaging app wrote.

After working on the campaign, Facebook rejected it before it could run, according to a screenshot shared by Signal. The screenshot also shows how Signal’s ad account was disabled.

The ads would have said something like: “You got this ad because you’re a K-pop-loving chemical engineer. This ad used your location to see you’re in Berlin. And you have a new baby. And you just moved. And you’re really feeling those pregnancy exercises lately,” according to screenshots shared by Signal.

“Facebook is more than willing to sell visibility into people’s lives, unless it’s to tell people about how their data is being used,” the app’s blog post reads. “Being transparent about how ads use people’s data is apparently enough to get banned; in Facebook’s world, the only acceptable usage is to hide what you’re doing from your audience.”

The social media giant’s polices do prohibit ads that “asserts or implies personal attributes” including “direct or indirect assertions or implications” about a person’s race, religion, beliefs, sexual orientation, gender identity, or other identifying features.

The move by Signal—which is well known as an aggressively privacy-centric company—shows a contrast between the data collection practices of the two companies.

Last week, Signal wrote a blog post detailing how little information it keeps on its users.

When ordered to provide information on users as part of an investigation by the United States Attorney’s Office in the Central District of California, the app explained that it was only able to hand over the times and dates when accounts were created and the last time they connected to the app.

Update 10:03am CT, May 5: In a statement to the Daily Dot, Facebook emphatically denied that Signal had tried to purchase ads on the site, saying it was a publicity stunt and that they were lying about them being rejected.

“This is a stunt by Signal, who never even tried to actually run these ads—and we didn’t shut down their ad account for trying to do so. If Signal had tried to run the ads, a couple of them would have been rejected because our advertising policies prohibit ads that assert that you have a specific medical condition or sexual orientation, as Signal should know. But of course, running the ads was never their goal—it was about getting publicity,” a spokesperson told the Daily Dot.

However, Signal shared screenshots calling out Facebook, saying the social media giant was lying and its account had been disabled.