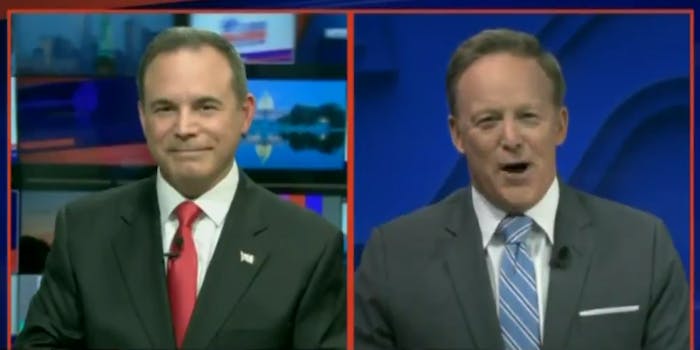 Sean Spicer interviewed by Newsmax while on mute the entire time

While serving as former President Donald Trump’s White House press secretary, Sean Spicer was rarely speechless—but he certainly was (mistakenly so) during an interview on Thursday night.

Spicer was brought on Newsmax on Thursday to ostensibly discuss First Lady Jill Biden having trouble with the Spanish phrase “Si se puede” during a speech to California farmworkers.

However, while host Chris Salcedo seemed to find Spicer’s remarks humorous, it was impossible for viewers to feel similarly because the former press secretary was completely muted for the entire interview.

As a clip posted online by Mediaite reporter Aidan McLaughlin shows, Salcedo and Spicer don’t appear to know that there’s some technically difficulties, so viewers were left guessing what he was saying.

Salcedo and Spicer go back-and-forth during the interview, with Salcedo asking Spicer about Jill Biden, Major League Baseball contemplating moving the All-Star Game out of Georgia over its much-criticized voting law, and other topics.

The clip goes on for a minute-and-a-half, and it’s pretty awkward.

While being muted for an entire interview is a bit embarrassing, it’s probably not as embarrassing as insinuating that the judges on Dancing With the Stars were out to get him.