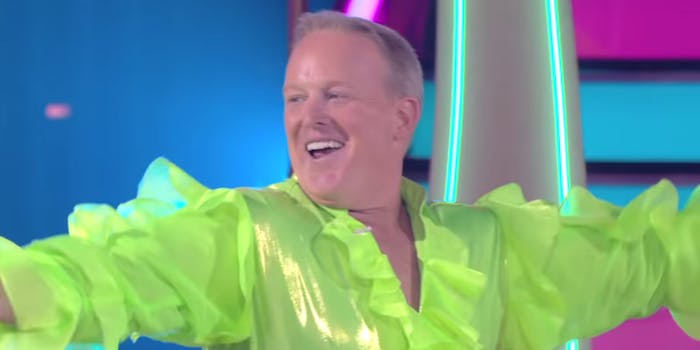 People had a lot to say about Spicer's debut on the show.

Former White House Press Secretary Sean Spicer made his debut on Dancing with the Stars on Monday night, sparking a number of jokes from people online.

The fact that the former press secretary would appear on this season of the show drew some criticism when it was announced earlier this summer. And on Monday night, Spicer wore a green neon blouse on the show–and people noticed.

if sean spicer gotta be on #dwts at least the costume designers are fighting back pic.twitter.com/fRYI4pWpRs

This is what life is now. #DWTS @seanspicer pic.twitter.com/heFCEwfjfT

Even the official account for the Democratic National Committee got in on it.

“A reminder that Sean Spicer lied repeatedly to the American people on behalf of Donald Trump and his administration. No amount of shimmying will change that,” they wrote.

A reminder that Sean Spicer lied repeatedly to the American people on behalf of Donald Trump and his administration. No amount of shimmying will change that.

But not all of the attention was bad—at least from some people.

Early Tuesday, Spicer responded to a tweet from former Arkansas Governor Mike Huckabee where he urged people to vote for the former press secretary to win on Monday night and “every night he’s on.”

It appears Spicer believes the judges are out to get him, given his reply.

“Thank you @GovMikeHuckabee Clearly the judges aren’t going to be with me. Let’s send a message to #Hollywood that those of us who stand for #Christ won’t be discounted. May God bless you,” Spicer tweeted.

Spicer and his partner scored a 12 on Monday night, one of the lowest scores given.