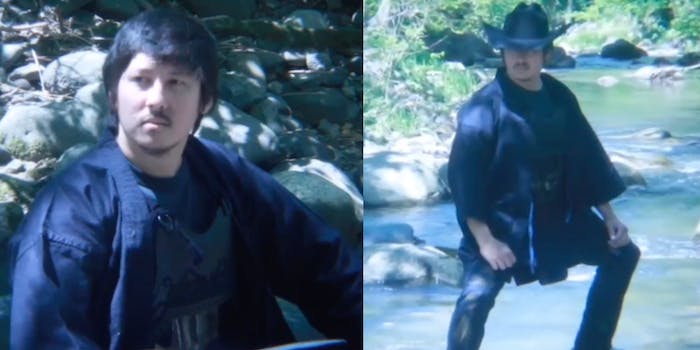 Former 8chan administrator Ron Watkins is being ruthlessly trolled on social media after uploading bizarre footage of himself in a cowboy hat and body armor.

Watkins, who has been accused of being “Q” from the QAnon conspiracy theory, shared the footage to at least two Telegram channels which boast a combined 300,000 followers.

In the clip, Watkins can be seen walking through the wilderness and posing for the camera while discussing “the goal of the AlienLeaks project.” Watkins also “puts a certain allegation to rest” before answering some of his followers’ questions.

AlienLeaks refers to Watkins’ newly-launched initiative aimed at procuring secret government documents on extraterrestrial life. As reported by the Daily Dot on Tuesday, despite promising the “biggest information drops in history,” AlienLeaks thus far has only published already-public data.

Watkins also goes on in the video to deny being one of the people behind QAnon after an HBO documentary showed evidence that appeared to point the finger at the far-right figure.

The topics discussed, however, weren’t what elicited interest in Watkins’ video. Watkins’ bizarre behavior and attire seemed to capture all the attention instead.

“Hard to believe that millions of people all around the world have been radicalized because of this dude, but here we are,” @AliciaMae_O said.

Watkins was also compared to an assortment of fictional characters.

Noting Watkins’ long history of spreading debunked claims and conspiracy theories, others simply wished that the controversial figure would disappear.

“He should’ve been in a CIA black site by now,” @TheTanRoosterIV added.

While his influence has undoubtedly wained following former President Donald Trump’s election loss in 2020, Watkins continues to hold sway over a significant portion of the internet’s most ardent conspiracy theorists.