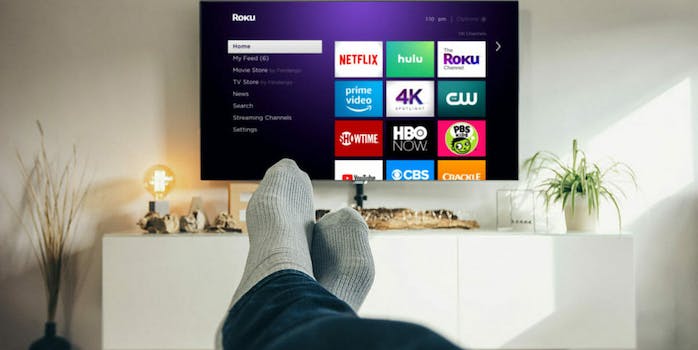 Roku vs Apple TV: Which streaming device rules them all?

Before you start shopping, here’s everything you need to know.

When it comes to streaming devices, it often comes down to cost and features. No two companies better exemplify this dichotomy better than Apple and Roku. On one end, there’s Apple TV, a shimmering example of luxury technology with a price to match. On the other is Roku, which offers a range of affordable options to fit any budget. Before you start shopping, here’s everything you need to know about Roku vs Apple TV.

Thanks to a flood of smart devices on the market, it’s easier than ever to start streaming. But from video game systems to smart TVs, the options for cord-cutting can be overwhelming. Luckily, when it comes to choosing a device both options are great. The devil is in the details, so lets learn a little more.

Thanks to a flood of smart devices on the market, it’s easier than ever to start streaming. But from video game systems to smart TVs, the options for cord-cutting can be overwhelming. Luckily, when it comes to the Roku or Apple TV, you can start streaming by plugging the device into your existing setup.

In the world of streaming, Roku represents choice and access, offering a range of affordable options for almost everyone’s needs. Whether you want a budget-friendly streaming stick or a 4K smart TV, Roku has something for you. This flexibility has helped the company amass a reported 27 million active accounts as of January 2019.

Part of Roku’s success is its simple interface and remote. Roku sorts all of your streaming apps in one simple main menu. The large app icons make it easy to understand for users of all ages. Each device comes preloaded with popular streaming services including Disney Plus, Netflix, Amazon Prime, and Hulu to get you started. Most popular streaming services, like Amazon and Netflix, require a subscription, but that doesn’t mean you need to pay for entertainment

2. Roku offers more free content than any other streaming device

But those channels are just a fraction of what Roku offers. There are over 1,000 official Roku channels, with thousands more private channels if you’re willing to dig. Roku helpfully breaks down its options during the setup process. Roku has a massive number of ad-supported free channels. These Roku free channels feature a mix of mainstream movies, sports, horror, cartoons, and local news. If you get bored with the free content, you can play with Roku hacks to enhance your experience.

3. Roku’s app is a killer feature

While each Roku device comes with a remote, they all also support for the Roku app. Roku’s mobile app is one of its biggest strengths, working as a secondary remote and a Private Listening device. Just plug in your headphones to your mobile device to listen to your TV without disturbing anyone else.

4. Roku has flexible pricing for any budget

Roku’s models start with the HD Roku Express at $29. If you’re using an older TV without an HDMI port, you can try the $35 Roku Express+, with composite cables. The final mid-range device is the Roku Premiere, which supports 4K picture, for just $39.99.

Want something with a low profile that sits out of sight? Roku’s Streaming Stick and Streaming Stick Plus are the most compact options that plug directly into your TV’s HDMI port. Streaming Sticks also come with an enhanced Roku remote, adding voice search along with volume and power controls for your TV. These models start around $49.99 and are top of the line.

Want something higher-end? Roku just debuted its first combo streaming device and soundbar, delivering jaw-dropping sound and 4K picture for $149.99. The service is also found on 4K TVs from TCL. Whether you’re building a home theater or a college student on their own for the first time, Roku is the answer to almost anyone’s streaming problems.

When you review Roku and Apple, it’s easy to overlook the simple pleasures of Apple’s streaming landscape. Apple TV was the first major streaming device to hit the market, and with time comes experience. From how it interacts with your existing Apple devices to setting it up, Apple TV has had a long time to figure out how things work, and sometimes that’s an advantage. Here’s what makes Apple TV great.

When making a Roku vs Apple TV comparison, Roku represents choice and Apple TV represents simplicity. With two models on the market, the only thing you need to know before buying an Apple TV is if you want 4K or not. Both models look the same and come with a Siri Remote. Simply unpack it, connect it to your TV via HDMI, and get started.

There are only two models of Apple TV available on the market, the Apple TV and Apple TV 4K. The standard Apple TV costs $149, with a 1080p video output, 802.11ac Wi-Fi, and Bluetooth 4.0. This model also comes with 32GB of storage for saving games and your library. Ultra HD TV owners meanwhile will want the Apple TV 4K, available in a $179 32GB version or a $199 65GB model.

2. Apple TV set up is simple

While learning to navigate Apple TV’s menus might take some work, setting it up is a breeze.  The top of your menu is made up of your Apple content: movies, music, app store, settings, etc. Below these options, you’ll find your streaming apps. During setup, you’ll need to go to the App Store to download services like Disney Plus, Netflix and Amazon Prime.

Apple TV sets itself apart with is its beautiful, yet tiny, Siri remote. Users control the TV using the glass touch surface on top of the remote. Sliding your finger up, down, left, or right moves the cursor, while pressing the glass selects your choice.

The remote is charged using the same Lightning cables as iPhones, saving you money on batteries in the long run. We also adore that each Apple Remote can be set up to control the volume on your TV.

Apple TV also supports gaming, letting users download titles from the iTunes store and play them on the TV with a Bluetooth remote. While these titles are still limited, you can find classics like Grand Theft Auto 3 and Chrono Trigger in the store.

What do Roku and Apple TV have in common?

Given how much Roku and Apple TV have in common it’s understandable if you have device-related questions. We might be asking who wins between Roku vs Apple TV, but the real winner should be you. Ultimately this is a battle that comes down to price and preferences, but here’s where they both excel.

Both Roku and Apple TV are great for streaming

If all you care about is watching Netflix, streaming live TV, and catching Game of Thrones, both Roku and Apple TV will meet your needs. If you’re not looking for particularly niché content, both Apple TV and Roku will have almost every app you could ever want. While Roku has an easier to understand system out of the box, both Roku and Apple TV are simple enough to learn quickly.

Each system offers voice search, though not every Roku model supports the feature. Both companies also include a remote and let you use your smartphone to control your device if (or when) you lose said remote. Both Roku and Apple TV also allow users to cast content from their smartphone to the TV using an app. At the base level, free of considerations like price, both Apple TV and Roku have a lot to offer.

While both Apple TV and Roku support casting, Apple TV is superior in that arena. Roku’s mobile app only allows you to cast movie, music, and photo files stored directly on your phone. Apple TV users, on the other hand, can easily cast any content from their MacBook or iOS device directly to the Apple TV.

From accessing media to screen mirroring your phone to your TV, Apple’s casting is much more advanced than Roku’s. This makes Apple TV better for office environments. Casting from a computer to a Roku is a nightmare that involves frustrating third-party apps. This is one category in the toss-up between Roku vs. Apple TV where Apple excels.

Roku, meanwhile, has way more content to watch. The service has the largest number of official streaming apps of any device on the market before you even look at private channels. Most of the private channels are a mess of abandoned content, but the gems are worth exploring.

Apple TV 4K automatically upgrades any existing movies you have in your iTunes library to 4K if available. If you’ve already spent a ton of money in the iTunes store buying digital movies, it’s nice to not have to rebuy them to upgrade. For digital movie collectors this is a massive point to consider when weighing Roku vs Apple TV.

Traditionally, we wouldn’t consider pricing a feature. However, when you’re talking about a $120 dollar price difference between starter models, price becomes a feature. For the cost of a standard definition Apple TV, you could buy a 4K Roku Ultra and still have $40 left over after taxes.

Apple TV is an incredible device. It’s feature-packed, beautiful—and frustratingly overpriced. In the battle of Roku vs Apple TV, it just can’t pull its weight. While the sheer number of options Roku offers may feel daunting, its starting price of $29.99 is comforting. Roku’s gigantic collection of streaming channels and easy-to-use interface makes it the best basic streaming device on the market.

The best part? If you’re choosing between Apple TV vs. Roku, almost every Roku model—no matter how luxurious—is a deal. We recommend the $59.99 4K Roku Streaming Stick+ for its picture quality and voice remote. If you need private listening, you can easily access the feature using the Roku app. But even if you splurge for the $99.99 4K Roku Ultra, you’re saving money over a standard-definition Apple TV.

If money is no object, and you’re heavily invested in the iTunes store, Apple TV is a great streaming option. But in a head-to-head street fight for which box deserves to play you Netflix, Apple TV can’t dodge the punches Roku throws when it comes to pricing.