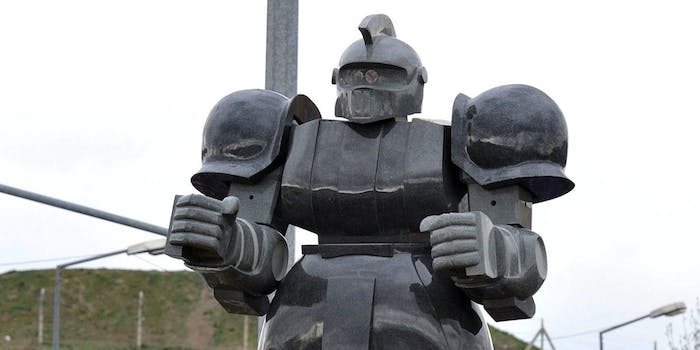 A Turkish politician and new personal hero is being sued by his citizens after blowing a big chunk of the city’s budget on building a giant robot, reports Unilad.

Melih Gökçek, mayor of Ankara, defended his decision but the Turkish Union of Engineers and Architects’ Chambers is suing, alleging the funds were misspent: “The money spent for the robot statues, which will be built for the Ankapark project and were referred to by Gökçek as his ‘prestige project,’ belongs to the inhabitants of the city. We filed a lawsuit.”

In response to criticisms that the statue is a “monstrosity” and a “criminal waste of funds” the mayor replied only: “Respect the robot.”

It’s unknown exactly how much he money spent on his metal masterpiece, but the mech stands 20-feet-tall and Twitter is pretty amused at the mayor’s audacity.

Laughing so hard at this that it literally hurts http://t.co/S1EsEyPB2X "RESPECT THE ROBOT!"

From now on, whenever I want someone to stop giving me a hard time, i'm gonna say "Respect the Robot", I hope this catches on.

"Respect the robot," says the clearly incompetent if not awesome mayor.

This is my kind of mayor. "Respect the robot" http://t.co/GpVCOf3OGr

In other #respecttherobot news, a giant transformer has been installed to monitor traffic in the DROC.

My favourite quote on DR Congo's metal traffic overlords comes from the Guardian: "We should respect the robot." http://t.co/vIilBcn7wY

In a report on robots Thursday, Nobel Peace Prize-winner for her work on banning anti-personnel land mines and founder of the Campaign to Stop Killer Robots told Motherboard: “If I could sit down with Google people, I would want them to make a public pledge to not become involved with autonomous killer robots.”

No word on whether Ankara or the DROC’s robots are weaponized but don’t disrespect them unless you want to find out.