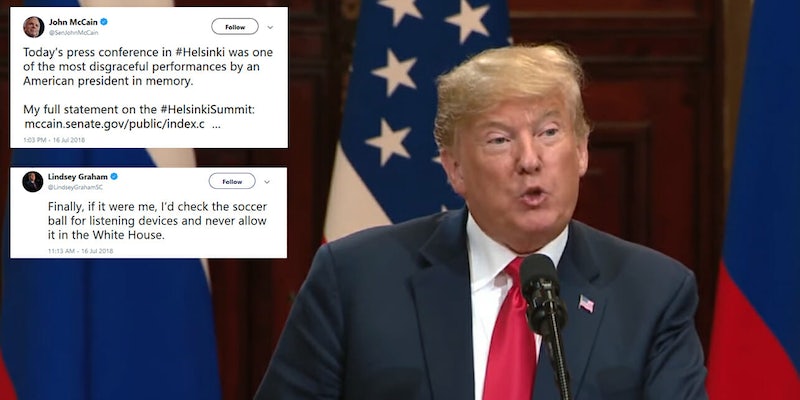 Even high-profile Republicans are slamming Trump for his Russia comments

No one is happy.

President Donald Trump refused to condemn Russia’s alleged interference in the 2016 election on Monday morning, prompting high-profile Republicans and even his own director of national intelligence to push back.

Trump’s decision sparked outrage among lawmakers, including a number of high-ranking Republicans.

“The president must appreciate that Russia is not our ally,” Ryan said in a statement. “There is no moral equivalence between the United States and Russia, which remains hostile to our most basic values and ideals. The United States must be focused on holding Russia accountable and putting an end to its vile attacks on democracy.”

Sen. John McCain (R-Ariz.), who has had a number of public disagreements with Trump in the past, was more forceful in condemning the president’s remarks.

“Today’s press conference in Helsinki was one of the most disgraceful performances by an American president in memory,” McCain said in a statement. “The damage inflicted by President Trump’s naiveté, egotism, false equivalence, and sympathy for autocrats is difficult to calculate. But it is clear that the summit in Helsinki was a tragic mistake.”

McCain said that Trump’s recent trip in Europe, where he also made controversial remarks about NATO, was a “recent low point in the history of the American Presidency.”

“No prior president has ever abased himself more abjectly before a tyrant,” he said. “Not only did President Trump fail to speak the truth about an adversary; but speaking for America to the world, our president failed to defend all that makes us who we are—a republic of free people dedicated to the cause of liberty at home and abroad.”

Meanwhile, Sen. Lindsey Graham (R-S.C.) called Monday’s press conference a “missed opportunity” by the president and cracked a joke about a soccer ball given to Trump by Putin.

“Missed opportunity by President Trump to firmly hold Russia accountable for 2016 meddling and deliver a strong warning regarding future elections,” Graham tweeted. “This answer by President Trump will be seen by Russia as a sign of weakness and create far more problems than it solves.”

Missed opportunity by President Trump to firmly hold Russia accountable for 2016 meddling and deliver a strong warning regarding future elections.

This answer by President Trump will be seen by Russia as a sign of weakness and create far more problems than it solves. (1/3)

The senator also tweeted that he would check the gifted soccer ball for “listening devices and never allow it in the White House.” During the press conference, Trump suggested he would give it to his youngest son.

The president’s own Director of National Intelligence Dan Coats also pushed back against Trump’s remarks, saying the intelligence committee has “been clear in our assessments of Russian meddling in the 2016 election and their ongoing, pervasive efforts to undermine our democracy.”

Democrats across the board slammed Trump for his comments in Helsinki. In a statement, Sen. Tammy Duckworth (D-Ill.) said it’s “a very real possibility” that Putin has spun Trump “into a Russian asset.” Sen. Bob Menendez (D-N.J.) tweeted that Trump’s performance at the press conference was “jaw-dropping” and “disgraceful.”