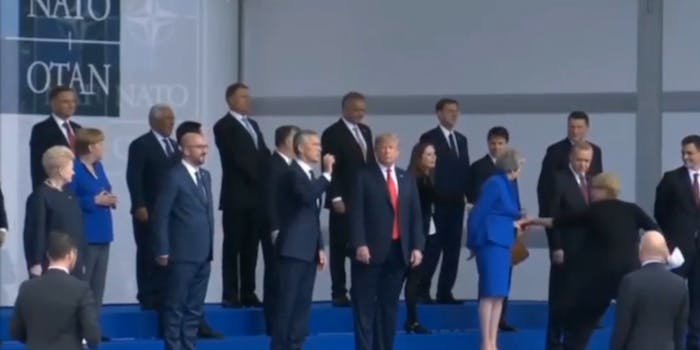 Just what is Trump doing in this awkward photo at the NATO summit?

President Donald Trump’s latest awkward photo moment, standing alongside world leaders and staring off into the distance at the NATO summit in Brussels, has delighted the internet.

As prime ministers and presidents of the military alliance’s countries organized themselves for a photo opportunity on Wednesday, Trump reportedly meandered onstage late with Turkish President Recep Tayyip Erdogan.

Once there, Trump appeared isolated, glancing around for someone to speak to but largely ignored by those around him, a sign that perhaps our allies are less than happy about his recent outbursts criticizing the intergovernmental defense collective.

Since arriving at the summit, Trump has clashed with German Chancellor Angela Merkel, claiming her country as “totally controlled by Russia.”

The tragedy of the situation aside, Twitter users were quick to point fun.

This photo is the perfect metaphor. Donald Trump clearly sees the world the wrong way when compared to other NATO leaders. Is it because he’s a moron, because Putin tells him to or a mixture of both? pic.twitter.com/RRGCN0Hw70

Merkel, May, Macron and Trudeau, all walked ahead on their way into the NATO summit family photo this afternoon. Trump walked in with Erdogan.

This photo from the NATO summit pretty much sums up Trump's foreign policy position towards Europe. pic.twitter.com/WodJ4Hv4ki

More summit gems are sure to come.