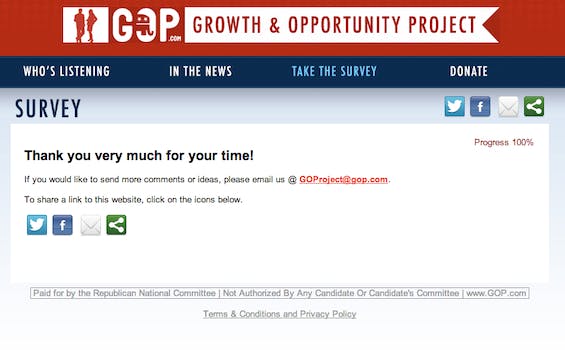 The Republican Party does a little soul-searching online

Just days after President Barack Obama took the oath of office and delivered an inaugural address that embraced a more liberal agenda (and possibly a more liberal nation), the Grand Old Party was doing a little soul-searching online.

The Republican Party launched an online survey recently that asked people where they wanted to see the party go in the future and how it might get there. The Growth and Opportunity Project was launched by party chairman Reince Priebus and is headed up by a five-person board.

“What do you think the party must do better? Where do you think we should go in the future?” Priebus asks in a brief video. “This is your chance to make your voice heard and we’re listening.”

Although Priebus says the party is listening, not everyone on YouTube agreed.

“I took the survey and made my thoughts known but I doubt the Republican Party cares. I am middle class, white, two children, get no handouts, etc and used to vote Republican even as little as two years ago but this year I went straight Democrat. Enough with the women bashing. Enough with shoving religion down my throat. I find it amazing that the﻿ Republican Party of small government feels they should control everyone and tell them what to do. Fail,” wrote Scott Williams.