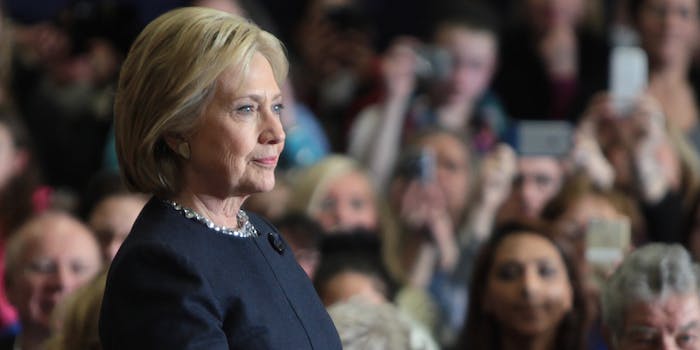 Did Reddit uncover the ‘smoking gun’ that could take down Hillary Clinton?

Where there's smoke there's fire—unless it's all just an illusion.

Reddit users claim to have uncovered new evidence revealing Democratic nominee Hillary Clinton’s emails were altered just prior to and during a congressional investigation into the 2012 Benghazi attacks.

The House Oversight Committee is now reviewing a group of Reddit posts seemingly made by Paul Combetta, an IT specialist, who worked on Clinton’s private email server.

The posts, made on July 23, 2014, ask how to alter the contents of a “VERY VIP” person’s emails to strip out the “VIP” email address. On July 22, just one day prior to the post, the Benghazi Committee and State Department agreed on the production of such emails, according to the FBI.

Combetta is best known as the man who deleted emails from Clinton’s private server in 2015 after the House Select Committee on Benghazi issued a subpoena for records relating to the 2012 Benghazi attack.

The Clinton presidential campaign has said that Combetta, who was employed by Platte River Network to administer the server, acted on his own. The wording of this post suggests that, for significant alterations at least, orders may have come from the Clinton camp.

Email deletion, which took place months after these posts were made, are never mentioned.

If the posts prove to be genuine, critics argue the posts may show that Clinton staffers pushed for alterations to the emails in order to avoid scrutiny from law enforcement.

The Justice Department granted Combetta immunity this month in its investigation into Clinton’s private emails. Republican lawmakers have been pushing for further investigation into deletion of emails, but Combetta’s immunity deal stood in the way, as he invoked his Fifth Amendment rights against self-incrimination and refused to testify before House Oversight Committee earlier this month.

The entire situation is extremely difficult to parse. It’s not clear yet if the posts are real, though evidence suggests this is really Combetta talking. If posts are real, it’s not clear that the “VERY VIP” email address was Clinton’s, nor is it certain the posts prove criminal action. And given the immunity that Combetta holds, as well as the status of the FBI investigation—the bureau recommended no charges against Clinton—it’s not clear what consequences these Reddit posts could have. Nevertheless, Trump supporters on Reddit believe this could be the “smoking gun” that ultimately takes down Clinton.

The ongoing House Oversight Committee investigation will ultimately decide how big a splash this stone will cause.

The Reddit posts were discovered on Monday and quickly reached the site’s front page. They were then promptly deleted by the user who also attempted to erase his entire account as thousands of onlookers watched. The efforts to delete were futile, however, because everything was thoroughly archived from the get go.

It’s not entirely clear yet if these posts were made by Paul Combetta, but the evidence is significant. The Reddit user making the 2014 post is named “stonetear,” which is a name shared by several Paul Combetta-linked accounts. Combetta.com is registered to [email protected] and the stonetear Etsy marketplace is listed under the name Paul Combetta.

While Clinton’s team argues that Combetta acted on his own, the wording of the stonetear post suggests otherwise.

“Hello all- I may be facing a very interesting situation where I need to strip out a VIP’s (VERY VIP) email address from a bunch of archived email that I have both in a live Exchange mailbox, as well as a PST file,” stonetear wrote. “Basically, they don’t want the VIP’s email address exposed to anyone, and want to be able to either strip out or replace the email address in the to/from fields in all of the emails we want to send out. I am not sure if something like this is possible with PowerShell, or exporting all of the emails to MSG and doing find/replaces with a batch processing program of some sort. Does anyone have experience with something like this, and/or suggestions on how this might be accomplished?”

One of the key pieces of language there is “they don’t want the VIP’s email address exposed to anyone,” suggesting that Combetta was not acting on his own but instead for “they,” which seems to refer to the people in charge—possibly the Clintons or their associates.

Clinton’s campaign did not respond to a request for comment.