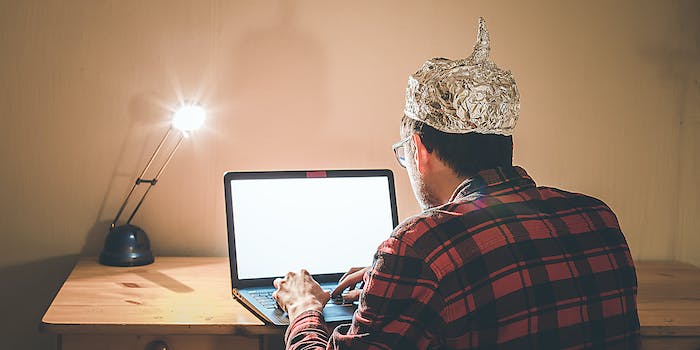 'Whatever the hold up is, take care of it.'

A QAnon supporter has penned an open letter to former President Donald Trump after countless predictions made by the conspiracy movement failed to materialize.

The letter, as first reported by Newsweek, was shared on Telegram by QAnon believer Donny Warren and quickly spread across the social media platform.

Warren specifically decried the failure of “Red October,” the false belief among conspiracy theorists that Trump’s enemies would be arrested en masse.

The QAnon conspiracy theory centers around the belief that Trump was secretly fighting a global cabal of child-eating pedophiles comprised of Democrats and Hollywood elites that would soon be arrested or executed.

“We have seen nothing happen,” the letter states. “I told a few of my ‘awake’ friends that either this would be the best Thanksgiving ever, or the worst. Guess which one it was?”

Some QAnon supporters believe that JFK Jr., who died in a plane crash in 1999, is still alive and plans to reemerge in order to serve as vice president under Trump. The belief also relies on the false claim that Trump is actually still president.

The conspiracy theory led dozens of QAnon believers to descend onto the site of former President John F. Kennedy’s assassination at Dealey Plaza in Dallas, Texas, earlier this month due to the belief that JFK Jr. would appear.

The letter’s reference to Flynn also highlights the conspiratorial mindset of QAnon adherents. Despite fellow QAnon promoter Lin Wood releasing audio of a phone call over the weekend in which Flynn called QAnon “nonsense” and its followers “kooks,” believers continue to view him as a mythical figure in the fight against the so-called cabal.

“For months, I have anticipated each day with excitement knowing that I was watching my president and his crew of Patriots take back our country and our freedom,” Warren added. “I am losing that excitement now. This is starting to get very old.”

Warren goes on to discuss health issues currently facing his wife while begging Trump to release secret medical technology known as “MED BEDS.” QAnon supporters have long believed that highly-advanced medical beds often seen in sci-fi movies have not only been hidden from the public, but can cure any and all diseases.

“On a personal level, my wife is struggling physically. She has an autoimmune disease that is greatly and increasingly causing her more pain and suffering as the weeks drag on,” the letter notes. “She could use a MED BED. And so could two of our children who have take the vaccine. They think I am a nut for believing in all this. And how many millions more across the country need a MED BED? My family is struggling, and so is our country.”

The letter concludes with Warren demanding action and calling on “patriots to stand up and demand” action as well.

“Whatever the hold up is, take care of it,” he writes. “If it’s high ranking officials that we thought were Patriots, then arrest them and bring charges.”