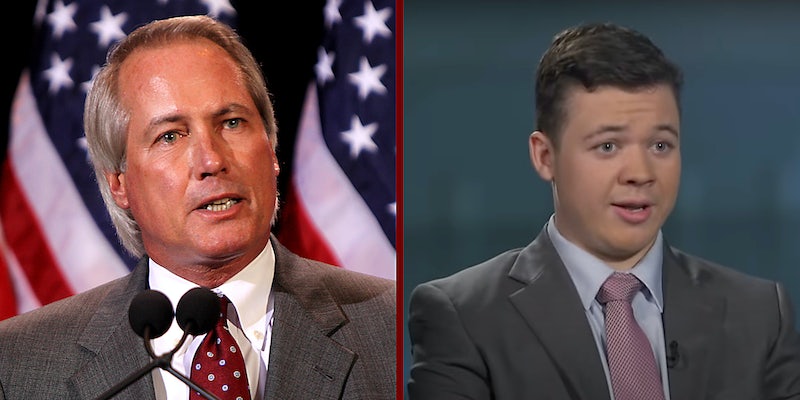 Kyle Rittenhouse’s explosive allegations about his former attorney L. Lin Wood have rocked QAnon followers. The conflict has divided the conspiracy theorists who believe that a cabal of pedophilic cannibals who worship Satan control the world.

Rittenhouse pilloried his ex-attorney in interviews this week. Wood, who has pushed the false notion that the 2020 election was fraudulent, initially represented Rittenhouse in the charges of murder and attempted murder he was acquitted on last week.

Rittenhouse told Fox News pundit Tucker Carlson that Wood had “taken advantage” of him and that he and another attorney convinced him he’d be safer in jail. Meanwhile, Rittenhouse said, “they were trying to raise money so they could take it for their own benefit.”

On NewsNation, he went even further, saying he’d fired Wood because of his conspiracist beliefs and mental state.

“We fired him because he was like going on with all this QAnon and election fraud stuff and stuff we don’t agree with,” he said.

“He is insane,” Rittenhouse also said.

He also blamed his legal team for arranging for him to be at a bar full of Proud Boys and claimed he thought they were just “construction dudes.” The incident generated significant controversy after photos of Rittenhouse posing with purported Proud Boys emerged.

But Wood has hit back. He’s blamed the “deep state” and claims he didn’t misappropriate funds.

On Wednesday, he wrote sarcastically on Telegram: “Can you believe how dumb I am??? I really wanted to keep Kyle Rittenhouse in jail as long as possible so they I could ‘grift’ off him, but then I made the horrible mistake of signing a personal guaranty on a $150,000 promissory note to actor Rick Schroder to get Kyle out of jail as soon as possible!!!”

He also released supposed accountings of his expenditures on the case.

QAnon followers and other conspiracists are deeply divided.

Wood’s former client and fellow QAnon proponent Rep. Marjorie Taylor Greene (R-Ga.) tweeted “Lin should go to jail for what he did to Kyle.” She also blamed him for Democrats beating Republican candidates for United States Senate earlier this year.

“He grifted off of Trump & told people not to vote on Jan 5th saying their vote would be stolen.”

Others have come to Wood’s defense. On Telegram, Mike Lindell thanked Wood for “all his efforts” and for asking him to donate to Rittenhouse’s bail.

“…[T]he allegations certainly seem out of character and do not reflect the Lin Wood that I know,” Ron Watkins wrote on Telegram.

“Lin is of the devil,” someone wrote in The Storm Has Arrived Telegram channel.

“I think the kid is being cajoled to defame Lin Wood, because he is fighting for FIX 2020 … I smell a rat,” another subscriber wrote.

While there have been squabbles, QAnon followers have largely stuck together. The rift now forming over the conflict between Rittenhouse and Wood seems to have tested the strength of that bond.