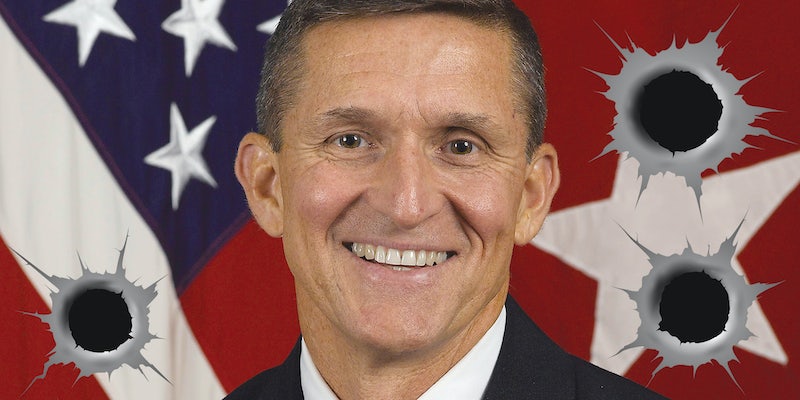 Viral clip shows Michael Flynn saying he might ‘find somebody in Washington, D.C.’ after a supporter gives him a gun

Many worry Flynn's QAnon fans won't be in on his 'joke.'

Over the weekend, a clip emerged of a supporter giving Michael Flynn an assault-style rifle at an event in California. As he accepted the gun, Flynn said, “Maybe I’ll find somebody in Washington, D.C.,” prompting laughter and cheers.

Flynn’s comment is being taken as a dog whistle to the same people who participated in and supported the Capitol riot, during which five died and more than 100 were injured. Many rioters, nearly 600 of whom have since been arrested, were QAnon followers. Flynn is something of a standard bearer to the QAnon conspiracy theorists who believe former President Donald Trump was fighting an evil international cabal of Satanists who rape and eat children.

Flynn has embraced their adoration. He’s spent much of the last several months on the road, speaking at events filled with QAnon believers.

He made the comment about finding someone in Washington, D.C. at an event at a church in Yuba, California. The clip was posted by outspoken QAnon critic Jim Stewartson.

It has 1 million views as of this writing.

While most don’t think that Flynn intends to actually shoot someone in the nation’s capital, they are concerned that at least some members of his audience don’t realize that he was kidding.

“He continues to make ‘jokes’ like this to crowds and groups littered with QAnon people and insurrectionists. And they are not going to see this as a joke,” tweeted attorney Ron Filipkowski, who describes himself on Twitter as a former Republican.

Several suggested that Flynn should be questioned by law enforcement for potentially threatening a public official. Numerous people brought up Kathy Griffin, who was investigated by the Secret Service after she posted a photo of herself holding a fake, decapitated Trump head.

Others believe that the military should punish Flynn, a former lieutenant general in the Army. He retired in 2014; in 2017, Flynn pled guilty to lying to federal law enforcement about his contacts with Russia. Trump subsequently pardoned him. Flynn continues to receive a pension from the military.

“He needs to be brought back to active duty, court martialed, dishonorably discharged and then lose all taxpayer benefits in retirement…” suggested one Twitter user.

Threatening government officials is a felony. There are no indications that Flynn is under investigation.