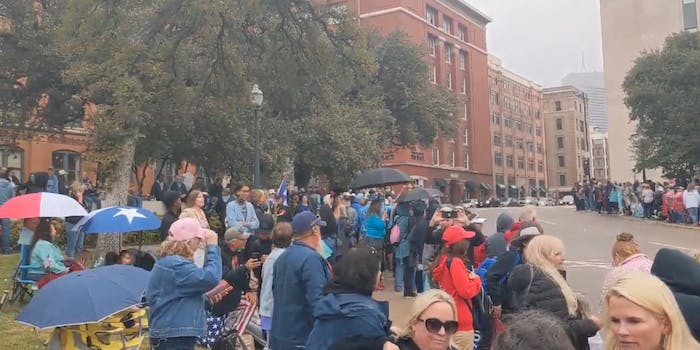 QAnon believers think they saw many dead celebs at the JFK Jr. rally

Supporters of the QAnon conspiracy theory flocked to Dallas on Tuesday over the false belief that John F. Kennedy Jr. (JFK Jr.), who died in a plane crash in 1999, would materialize to reinstate Donald Trump as president.

The false claim was promoted this week by a QAnon guru on Telegram, leading hundreds of conspiracy theorists to gather at Dealey Plaza, the location where former President John F. Kennedy was assassinated in 1963.

The belief that JFK Jr. is still alive and secretly working with Trump has been pervasive for some time in the QAnon movement.

Despite JFK Jr.’s inability to appear at the rally, QAnon supporters didn’t consider the day a total failure after becoming convinced that numerous other deceased celebrities were among the crowd.

One conspiracy theorist live streaming the event claimed that Hollywood actor Robin Williams, who died by suicide in 2014, had been spotted. Professional stock car driver Dale Earnhardt, who died during a race in 2001 after a horrific crash, was also cited by the streamer as being present.

An individual in a mask was also alleged to be pop star Michael Jackson, who died in 2009 from cardiac arrest due to a prescription drug overdose.

Even with yet another failed prediction under their belts, QAnon supporters remain convinced that the prophecy involving JFK Jr. and Trump’s return to office will be fulfilled. As noted by BBC journalist Shayan Sardarizadeh, at least one user on Telegram called for their fellow conspiracy theorists to “keep the faith.”

“I’m sad for everybody. We now look like a bunch of liars,” they wrote. “[B]ut let’s keep the faith.”

The JKF Jr. conspiracy theory, however, isn’t supported by everyone in the QAnon movement. Other prominent QAnon gurus responded to the rally on Telegram by falsely claiming that those who attended were either secretly working for the media or the government to frame their beliefs as outlandish.