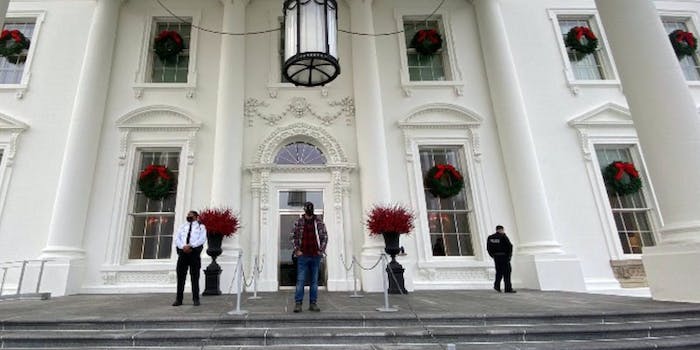 The White House is saying otherwise.

Proud Boys chairman Enrique Tarrio made waves this morning when he posted that he was at the White House, seemingly by invitation. However, the White House is claiming differently.

Los Angeles Times reporter Chris Megerian shared a screenshot of a post Tarrio made on Parler, the social media platform that has been attracting Trump supporters who claim Facebook and Twitter are censoring them.

“Last minute invite to an undisclosed location… Wow… I’m in awe,” the post read, with a #Trump2020 hashtag at the end.

Worries about potential links between President Donald Trump and the Proud Boys have been heightened ever since a statement made by the president during a debate—telling them to “stand back and stand by”—appeared to be interpreted by the group to mean they should wait for his signal to enact violence against their enemies in his name.

The male-only group has a reputation for political violence, and some of its members have ties to extremist groups that promote white supremacy.

As Trump continues to contest his overwhelming loss to Joe Biden in the 2020 presidential election, the appearance of the leader of the Proud Boys at the White House drew concern that the outgoing president himself may be meeting with Tarrio.

However, the White House refuted Tarrio’s claim that he was “invited” and said he was simply on a public tour.

“He did not have a meeting with the President nor did the WH invite him,” White House spokesperson Judd Deere reportedly said.

Tarrio appeared to backtrack after the White House’s statement on the matter, telling NPR reporter Hannah Allam he was touring the grounds with “another group” and clarifying that Trump was not present.

Still, several users pointed out that a “last minute invite” to a public White House visit is unlikely, as Tarrio would have had to be vetted ahead of time.

Tarrio was likely among the Trump supporters who flocked to Washington, D.C., over the weekend as part of a march to urge the president to continue attempting to overturn the results of the election. Hundreds of Proud Boys were present at the march and, according to The Washington Post, “seemed intent on intimidating onlookers” as they spouted off debunked conspiracy theories regarding Biden’s win.

Trump’s campaign has already lost dozens of lawsuits alleging widespread voter fraud, and the Supreme Court refused on Friday to hear a lawsuit brought against four swing states by Texas.