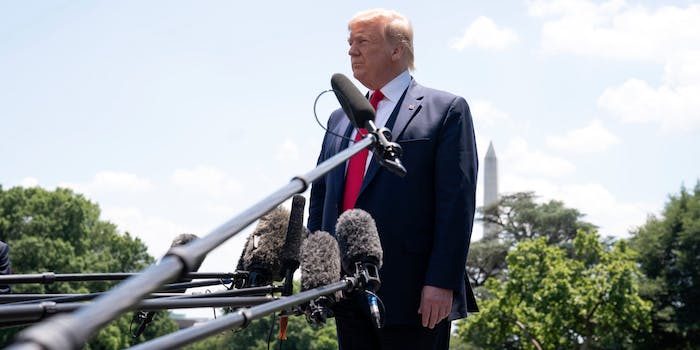 President Donald Trump denied knowing anything about the Proud Boys on Wednesday, hours after failing to condemn the far-right group during the first presidential debate.

While speaking with reporters outside of the White House on Wednesday, Trump called for the group to “stand down” after previously telling them to “stand back and stand by.”

“I don’t know who the Proud Boys are. I mean, you’ll have to give me a definition because I really don’t know who they are,” Trump claimed. “I can only say, they have to stand down. Let law enforcement do their work.”

The president went on to denounce Antifa while demanding that former Vice President and 2020 Democratic presidential nominee Joe Biden do the same.

Trump’s initial comments about the Proud Boys, which came after he was asked to condemn white supremacists, were seen by many as an endorsement of the group.

Trump’s remark outside of the White House came not long after a prominent member of the Proud Boys was arrested in Oregon. The member is facing numerous charges, including felony assault and unlawful use of a weapon.

Despite Trump’s failure to denounce the group and white supremacists on multiple occasions, the president’s supporters spent much of Wednesday convincing themselves that he in fact had.