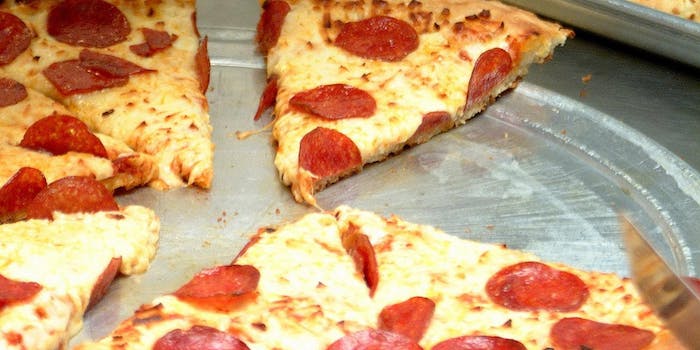 Technology is a beautiful thing. It lets you…uh…write words to people? Take photos of cool stuff? Send two-letter slang interjections from the 1990s? I dunno, I can’t think of anything else, because I’m too busy freaking out over this incredible app that tells you how many pizzas you should order.

The iOS app is called the Pizza Counter, and it is, essentially, the apotheosis of Western civilization. Created by Rick Mendes, a web designer from Hoboken, the Pizza Counter has one function and one function alone: to let you know exactly how many pizzas you need to order for a large family gathering, work function, or sleepover party, without doing any arithmetic whatsoever.

All you have to do is tell the app how many people you’re ordering for and how hungry they are, and the app will calculate exactly how many pizzas you need to buy. It also connects to Yelp to show you the nearest pizza places in your area, as well as the largest size pie you can order from the restaurant.

At this point, you might be wondering how, exactly, the Pizza Counter knows how many pizzas are needed to fill a set number of people’s grumbling tummies. “Doesn’t everyone have their own, highly subjective threshold for how many pieces they can consume in one sitting?”, you might be saying skeptically. “How, prithee, can the Pizza Counter determine exactly how many slices are needed to fill up each person, down to the last pepperoni slice?”

Naysay no more, naysayer: Mendes has got you covered. He came up with a “golden ratio” to calculate the ideal number of slices per person: two and a half, which sounds about right. That comes out to about 16 18-inch pies for 50 people, or 22 if they’re particularly peckish.

Mendes doesn’t expect to change the world with Pizza Counter, referring to it as a “silly app,” but we think the man is just being modest. And if he doesn’t pull in at least half as much as Yo allegedly has in funding, then we should all just up and stop reproducing altogether, for the world is dark and mankind’s future is barren and cold.