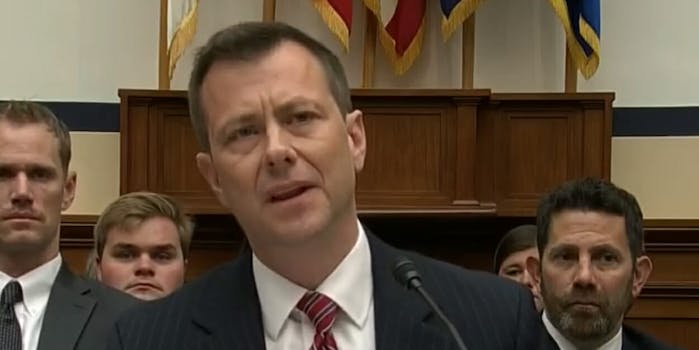 GoFundMe for Peter Strzok’s legal bills raises $230,000 in one day

Strzok was fired earlier this week.

A GoFundMe page has been set up to help pay for the “considerable legal bills” for recently-fired FBI agent Peter Strzok, a frequent target of President Donald Trump.

The donations have ranged from $2,000 from an anonymous donor to as little as $10. The money will be put into a trust to pay for the “hefty–and growing–legal costs” and “lost income,” according to the page.

Deeply saddened by this decision. It has been an honor to serve my country and work with the fine men and women of the FBI. https://t.co/iET9SbeTrv pic.twitter.com/7VTswzjoxE

Strzok, who has drawn the president’s scorn after it was revealed he sent anti-Trump text messages to another FBI agent he was having an affair with, was fired on Monday despite the recommendation that he be suspended for 60 days.

The texts between Strzok and Lisa Page have ignited conservative corners of the internet for months. Earlier this year the #FindTheTexts hashtag exploded and was used as a way to discredit Special Counsel Robert Mueller‘s probe into Russian interference in the 2016 election.

The former FBI agent was reassigned from Mueller’s team following the discovery of the anti-Trump text messages.

Amid all of this, Trump has routinely called him out on Twitter.

Strzok also testified before Congress last month where he said the FBI was not conspiring to get Hillary Clinton elected, a claim raised by Trump supporters because of the disparaging messages sent between Strzok and Page.

On Tuesday, the president (incorrectly) tweeted that Strzok started the Mueller investigation and called the former FBI agent a “fraud.”