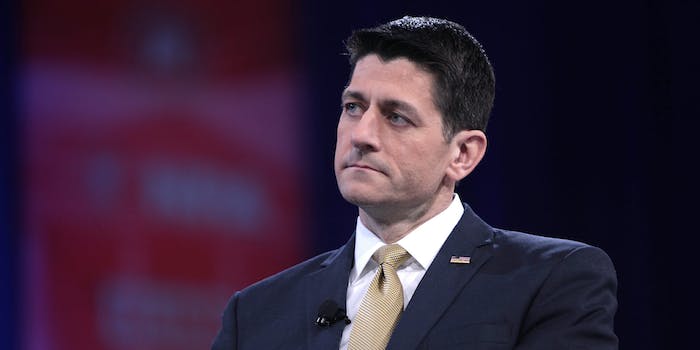 Speaker Paul Ryan (R-Wisc.) reinstated the Rev. Patrick J. Conroy as the House of Representatives chaplain on Thursday, after the Conroy sent him a letter rescinding his forced resignation and daring the speaker to fire him, according to The New York Times.

“I have accepted Father Conroy’s letter and decided that he will remain in his position as chaplain of the House,” Mr. Ryan said in a statement. “It is my job as speaker to do what is best for this body, and I know that this body is not well served by a protracted fight over such an important post.”

Ryan released his statement after Conroy penned a letter to Ryan rescinding his resignation and said that because he has served since 2011 without issue, he desired to continue to serve unless Ryan wished to officially terminate his services.

“While you never spoke with me in person, nor did you send me any correspondence, on Friday April 13, 2018 your Chief of Staff, Jonathan Burks, came to me and informed me that you were asking for my letter of resignation,” Conroy wrote. “I inquired as to whether or not it was “for cause,” and Mr. Burks mentioned dismissively something like “maybe it’s time we had a Chaplain who wasn’t a Catholic.” He also mentioned my November prayer and an interview with the National Journal Daily.”

Some members of the House tweeted they were happy to see the Chaplain reinstated.

I applaud Speaker Ryan's decision to accept Fr Pat Conroy's rescission to resign as Chaplain of the House. Now we can begin the healing process after this ugly, unwarranted incident.

Deeply concerned the Speaker’s Chief of Staff would express an open hostility to a Catholic House Chaplain. I’m reminded by my friend (and constituent) @JamesMartinSJ that a famous American historian once observed anti-Catholicism “is the last acceptable form of prejudice.”

After Conroy resigned in April, he told the press that Ryan told him to “stay out of politics” after he prayed for balanced benefits and equality on the House floor as the chamber debated tax reform.

“May all members be mindful that the institutions and structures of our great nation guarantee the opportunities that have allowed some to achieve great success, while others continue to struggle,” Conroy prayed. “May their efforts these days guarantee that there are not winners and losers under new tax laws, but benefits balanced and shared by all Americans.”

But now Conroy has told The New York Times that he takes part of the blame.

“We both acknowledged that we need to talk about how I can improve my performance so the chaplaincy operates for as many members as possible,” he said. “I don’t know any pastor or any chaplain anywhere that doesn’t have some detractors. That is the human condition. My problem is I was never told that that was the case.”

Conroy said he and Mr. Ryan will sit down together on Tuesday when the House is back in session.