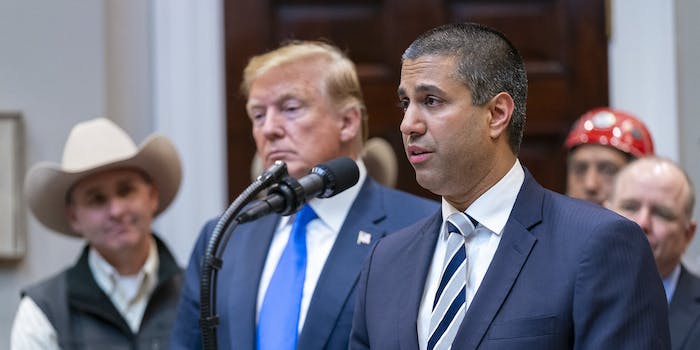 The FCC's voluntary pledge for providers ends at the end of this month.

Pai urged Congress for legislation in a letter on Friday, according to the FCC. The chairman said broadband companies who have signed onto the voluntary Keep Americans Connected pledge can’t “continue to provide service without being paid for an indefinite period of time.”

The pledge, which has been signed by 785 companies, says the providers will not shut off service for customers who are unable to pay because of the pandemic.

The pledge expires at the end of this month.

However, there have still been hundreds of complaints filed with the FCC alleging that providers have in fact turned off service despite the pledge.

When the pledge was announced earlier this year, several experts pointed out that the FCC’s decision to repeal net neutrality hindered its ability to respond to the crisis.

The repeal placed broadband under Title I of the Communications Act instead of Title II, where the industry was classified under net neutrality rules. That essentially abdicated the FCC’s authority over broadband providers.

Although the Wicker legislation doesn’t get into specifics, it calls for “establishing programs so that anyone experiencing economic hardship as a result of the COVID pandemic remains connected and knows what resources are available,” to help ensure people continue to stay online.

Lawmakers have pushed for broadband funding to be included in coronavirus relief packages, and advocacy groups have argued that broadband service should not be shut off for an extended period of time after the pandemic.

Meanwhile, a bill that would restore net neutrality and put broadband providers under Title II—the Save the Internet Act—has stalled in the Senate after passing in the House of Representatives last year.

The FCC said Pai has asked companies not to disconnect consumers after the pledge has ended if they are behind on payments, and instead to offer payment plans and deferred payments.