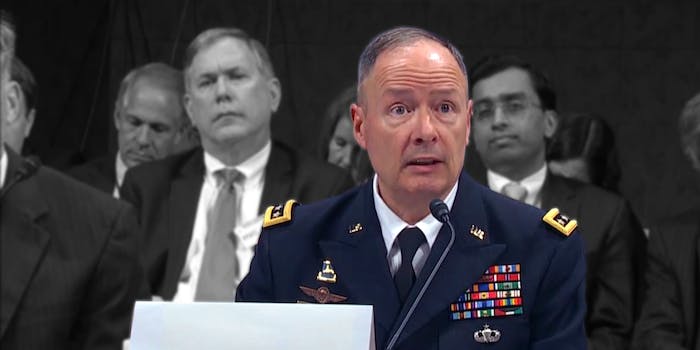 This is why NSA officials keep bringing up 9/11

You're not hearing things.

You’re not hearing things. National Security Agency documents obtained by Al Jazeera show that the agency actively pushes 9/11 and terrorism as justification for its surveillance programs.

Whether the NSA‘s numerous programs and vast reach actually stop terrorism is hotly debated. In a congressional hearing Tuesday, NSA director Keith Alexander defended the agency’s practices, noting that there hasn’t been a major terrorist attack on U.S. soil since 9/11.

But as privacy advocates have noted, that could be misleading. Alexander has drastically reduced the number of recent terrorist attacks directly stopped through NSA intelligence from 54 to one. Glenn Greenwald, the journalist in possession of the majority of contractor Edward Snowden‘s intel, has frequently criticized intelligence officials for being eager to invoke terrorism to justify spying.

And indeed, Al Jazeera’s list of official NSA talking points, obtained legally through a Freedom of Information Act request, is evidence that Greenwald is right. “First responsibility is to defend the nation,” reads the first one. “NSA and its partners must make sure we connect the dots so that the nation is never attacked like it was on 9/11,” reads the second. Under the heading “sound bites that resonate” is the phrase “I much prefer to be here today explaining these programs, than explaining another 9/11 event that we were not able to prevent.”

Other talking points seemingly are aimed at deflecting criticism of the agency, pointing out that the Patriot Act and court rulings make its metadata collection legal, and that George W. Bush approved that program and President Obama allowed it to continue.

You can read the complete document here.