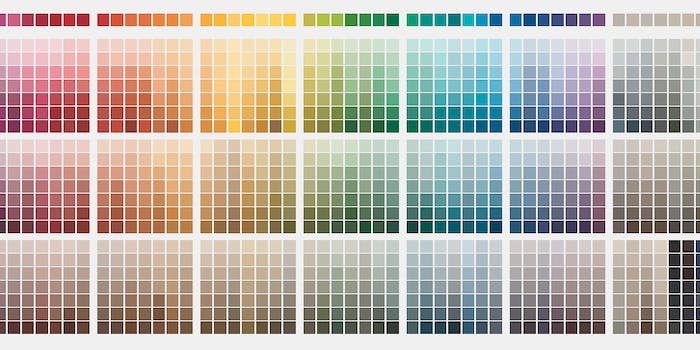 Well, this is one area AI does not yet excel in.

Research scientist Janelle Shane recently tasked a neural network with an interesting challenge. After feeding it the names and RGB values of paint colors, the AI came up with new colors and names of its own. The results are surprisingly hilarious.

“So if you’ve ever picked out paint, you know that every infinitesimally different shade of blue, beige, and gray has its own descriptive, attractive name,” Shane explains in her Tumblr post. “But given that the human eye can see millions of distinct colors, sooner or later we’re going to run out of good names. Can AI help?”

To find out, Shane, who previously tried to AI to cook, gave the neural network roughly 7,700 Sherwin-Williams paint colors and their RGB values. She then used a char-rnn algorithm (which predicts the next character in a sequence, Ars Technica explains) to come up with number sequences that match to an RGB value and come up with letter sequences for new names.

The neural network did a decent job of coming up with new paint colors, but its naming skills were… well, take a look for yourself.

The above names came after several rounds of algorithmic tweaking. Initially, the AI invented color names that weren’t real words. For example, it mashed the words brown, blue, and gray together to form “colors” such as “Caae Brae” and “Saae Ble.” The reasoning for this, Shane explained to Hyperallergic, is: “If it’s seen a lot of colors whose names begin with ‘Blue,’ then there’s a good chance it will pick an ‘l’ for the next character in the sequence,” Shane said. “Then, given ‘Bl,’ it will likely either spell ‘Blue’ or ‘Black.’” With the algorithm’s creativity levels set a little too high though, it would come up with non-color words such as “blobby” or “butt.”

It then successfully learned the words gray and green, but it didn’t actually match those color names to gray or green colors. Eventually, as you see above, it got the gist of colors like white, gray, and red. (Although the names don’t sound like anything you’d want to paint your living room in. Looking at you, Stanky Bean.)

After people caught wind of her project, Shane followed up her initial experiment with input from fans and fellow computer scientists. She lowered the “creativity” level of the AI’s color temperature setting and got much more accurate results—albeit mostly earthy browns and greens. These had names such as “Malora Gray,” “Baterswort,” and “Furgy Brown.”

Then, she changed the way the neural net represented color values. Instead of RGB, she tried HSV, which documents color values as hue, saturation, and value. The results here certainly weren’t much worse.

She also tried LAB color settings, which represents color as lightness, the amount of green vs red, and the amount of blue vs yellow. No matter the color representation, the AI performed about the same.

However, there was one thing that did make the AI better: feeding it more colors and names. A blog reader compiled names and colors for other paint manufacturers, such as Behr and Benjamin Moore. Once fed into the neural network, it came up with much more pleasant-sounding names such as “Vermo Turquoise” (for a green-blue hue), “Esprisse Blue” (for a medium-dark blue), and “Bright Beach” (for a sunny yellow).

Perhaps AI has a future in color naming, after all.