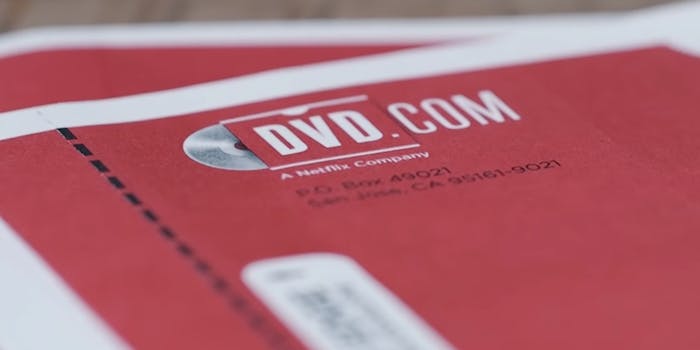 Netflix DVD: What is it, how does it work, and what does it cost?

Remember Netflix DVDs? The company has completely changed its business model to support many more devices since it helped kickstart the movie streaming revolution, but some things stay the same. You might be surprised to learn that Netflix is still sending out DVDs. For years those little silver discs were the company’s bottom line. While Netflix original series and movies have certainly been more profitable, millions of people still subscribe to a Netflix DVD plan. It might seem silly, but once you consider the benefits you might change your mind. Here’s how Netflix DVD plans work, and how to make the most of yours.

How do Netflix DVD plans work?

Netflix DVD plans come in three formats and lets customers choose either standard definition DVDs or Blu-ray discs. All plans include the first month free, free shipping and returns, and no late fees. That means you can keep your discs as long as you want for the life of your subscription. While Netflix DVD subscriptions previously included access to the streaming service, those days are over. You’ll need a separate subscription to service.

Discs typically arrive in one to three business days. We tested the service in Los Angeles and never had to wait more than a day or two. If you live in a rural area, however, you may face longer waits. But generally, DVD distribution is speedy.

Your movies arrive in a resealable envelope. As soon as you’re done watching, put them back in the envelope and drop them off for your mail carrier. Once Netflix’s tracking service is notified your movie has been picked up by the post office, they’ll send out your next title. Watch and repeat.

Choosing the right plan ultimately comes down how many movies you watch every month.

Compared to other services like Redbox, Netflix’s DVD plan is a steal—especially if you find yourself renting a large number of new releases. Starting Dec. 2, 2018, a new Redbox price change specifies that each DVD rental will cost $1.50 per day or $2 per day for each Blu-ray disc. Even with a day or two window between DVD deliveries, Netflix DVD allows you to watch way more films per month at a more reasonable cost.

Netflix’s DVD plan may not immediately sell itself, especially given the endless streaming options at your fingertips. Hell, streaming on Netflix might sound better than using Netflix DVDs. There’s just one thing you don’t get with those endless options: a real choice. How many nights have you sat in front of the TV endlessly scrolling through thousands of options you’ve never heard of before? How often have you wanted to show someone a film only to realize it isn’t streaming anywhere?

Netflix changed the game when it introduced its streaming service. But over time, the game has changed with them. As streaming competitors like Amazon Prime and Hulu emerged, licenses became more expensive, especially for big Hollywood movies. You can barely watch any movies from before 1980 on Netflix right now, and its catalog of modern titles is increasingly made up of “originals” instead of blockbusters.

Sure, you’ll have access to fewer movies with Netflix DVDs. But what you’ll lose in quantity you’ll make up for in quality. Your kids and friends deserve to watch true classics, not just what the streaming services have licensed this month.

Is a Netflix DVD plan worth it?

The mileage you’ll get out of a Netflix DVD plan is up to you. Some people watch TV to have something to watch. There’s nothing wrong with that, and standard Netflix streaming is more than enough to meet those needs. But if you miss movie rentals as a special occasion, renting from a huge library of blockbuster classics, or receiving regular mail, that’s another matter. Netflix DVD forces you to slow down, pick your movie mindfully, and return it.

As a reward, you get hundreds of thousands of movie choices that your streaming friends don’t get. Classic films, new indie releases, and movies you meant to catch in theaters. If you ever feel like you’re just watching Netflix for the sake of having something to watch, test out a month on the Netflix DVD plan. True movie lovers should already be subscribed.