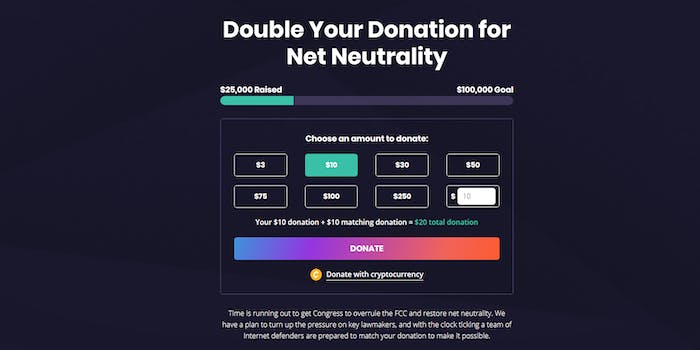 Net neutrality activists are crowdfunding money as a new way to pressure lawmakers. The goal: Get Congress to support an effort that would overturn the Federal Communications Commission‘s (FCC) decision to rescind net neutrality rules.

The effort, launched by internet rights advocacy group Fight for the Future, is asking people to donate to help fund ad-buys, billboards, and both in-person and online protests ahead of the deadline for the House to pass its Congressional Review Act (CRA) effort that would overturn the FCC’s net neutrality vote.

“Net neutrality is not dead yet. Not even close,” Evan Greer, the deputy director of Fight for the Future, said in a statement. “But time is running out on our best chance to get Congress to save the open Internet. Comcast and AT&T’s lobbyists are doing everything they can to make sure Congress adjourns without addressing this. We have to make it something they can’t ignore.”

The group has set up a website, donatefornetneutrality.com, that outlines the plans for the collected funds. The group said it will buy ads online and in print and put up billboards in “key districts” among lawmakers who have not yet signed onto the CRA efforts.

Earlier this year, the Senate passed its version of the CRA with bipartisan support. The House needs a simple majority to pass its version by the end of the year. Currently, 177 lawmakers have signed on, making it 41 votes shy of reaching a majority.