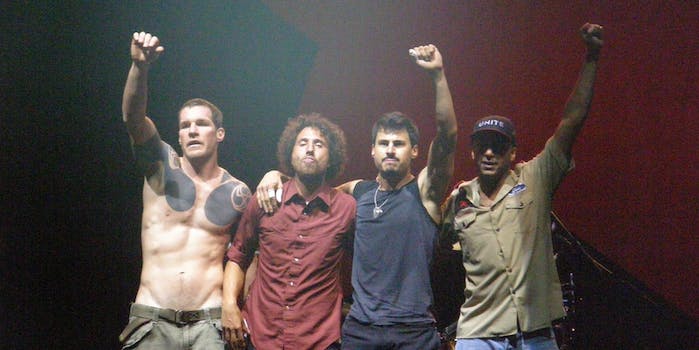 Rage Against the Machine is coming back around again.

At least that’s what a new countdown website suggests. Last night, the band, which hasn’t released a new album since 2000, debuted a new website pointing to June 1 and referencing “prophets of rage.” That’s the title of a Public Enemy song, and yesterday Chuck D tweeted out a RATM video.

Rage Against The Machine – Bulls On Parade – Live At Finsbury Park, Lond… https://t.co/JB3o9KaupZ via @YouTube

The hashtag #takethepowerback is also circulating, which references a RATM song.

RATM, which rose to popularity through its politically charged songs in the ’90s, hasn’t performed since 2011. It’s weird to think that the band was largely dormant during the Bush presidency, but perhaps they’ve been revitalized by the specter of a Trump presidency. After all, they saw it coming way back in 1999, as guitarist Tom Morello reminded us yesterday.

People are apparently really excited because the site crashed on Wednesday afternoon. As of press time, it’s still down, but there is an alternate route.

POR website crashed due to huge wave of traffic. Back soon, sign up here for now. #takethepowerback #prophetsofrage https://t.co/s9KdeGPZeQ

There’s been speculation that the group might be planning something around the Republican National Convention, but one person who is definitely stoked about this is Paul Ryan.

Update 9:00am CT, May 19: The website signals the formation of a new supergroup that features members of Public Enemy and Cypress Hill, Pitchfork reports. Rage singer Zack de la Rocha is reportedly not involved with the new band, called Prophets of Rage.