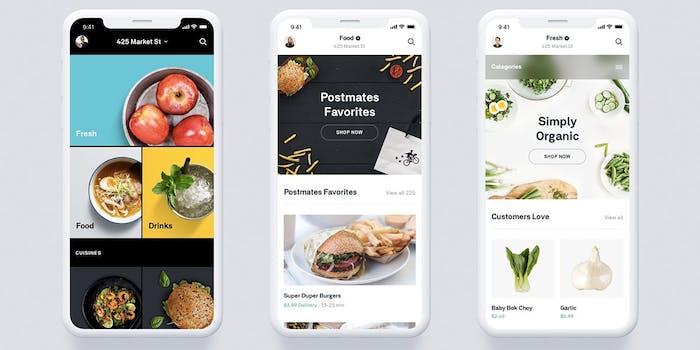 For Postmates, the expansion to grocery delivery feels like a natural fit, especially as competitors such as UberEats break into its restaurant food delivery niche.

The new grocery delivery service will charge either $3.99 per delivery or a flat fee of $9.99 per month, according to Bloomberg. That means it’s cheaper than its competitors: AmazonFresh, Amazon’s grocery delivery arm, costs $279 annually with Prime and AmazonFresh membership fees. Postmates would cost less than $120 annually. Instacart, by comparison, charges $5.99 to $7.99 for each delivery, plus a service fee.

Postmates Fresh also promises to make deliveries in half an hour or less. Between this and its cheaper delivery fees, it’s a good option if you realize you forgot a couple items at the grocery store and need them ASAP in time for dinner. AmazonFresh needs around 24 hours to fulfill deliveries, while Instacart typically takes at least an hour.

While its upfront prices are higher, Amazon could perhaps get a leg up when it comes to food and produce costs. In August, Amazon acquired Whole Foods immediately began cutting Whole Foods prices, offering special deals to Amazon Prime subscribers, too. Amazon will also have 470 North American Whole Foods locations from which it can deliver groceries from. For cheap bulk items, Instacart introduced a recent partnership with Costco.

Postmates is hoping that millennial grocery buyers will prefer purchasing food from it, rather than a tech company like Amazon. The price and delivery speed may matter more in the end than the brand name of who’s accomplishing the delivery, though. And in that respect, Postmates has the advantage—for now.