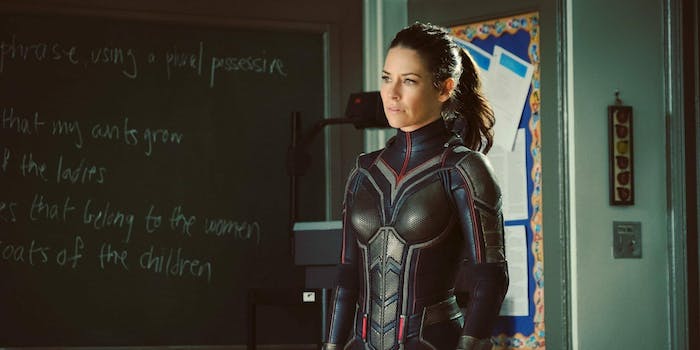 For women, uncomfortable clothes are the norm.

Superhero actors love to complain about their uncomfortable costumes, but there’s a pretty obvious divide between men and women. While actresses mostly complain about egregiously sexy costumes like Mystique’s blue body paint or Harley Quinn’s shorts, men have more issues with physical discomfort.

Ant-Man and the Wasp star Evangeline Lilly has a unique perspective on this issue, because her costume is essentially a female version of her male co-star’s outfit. In this 40-second clip from the film’s press tour, she shut down the whole debate. Basically, those costumes aren’t as uncomfortable as men seem to think.

“It’s just not that bad!” she said. “Do I have the most comfortable suit in the MCU, or have men not had the life experience of being uncomfortable for the sake of looking good?” As Lilly holds up one of her stiletto shoes for emphasis, you have to admit she has a point.

Lilly’s comments are both hilarious and a succinct breakdown of an age-old issue. When women complain about high heels or uncomfortable beauty treatments, there’s a tendency for guys to point out that it’s a personal choice. And technically speaking, they’re right. Women are free to wear whatever they want, but there’s a tremendous pressure to follow mainstream beauty standards, with all the discomfort that entails. Especially if you’re an actress like Evangeline Lilly.

Looking back at what other superhero stars have said about their costumes, the double standard is pretty clear. Some guys like Chris Evans and Christian Bale have spoken about getting headaches from their helmets, which is a fair complaint. But there are plenty of male actors who complain about something that’s basically an expected norm for women: wearing a tight outfit. Ben Affleck described Batman’s CGI body-stocking as “humiliating,” and Andrew Garfield was worried about people taking unflattering photos of him wearing the Spidey suit.

Ironically enough, the male-dominated superhero genre is giving men some unexpected insight into the daily life of womankind: habitual discomfort, and a constant sense of scrutiny.