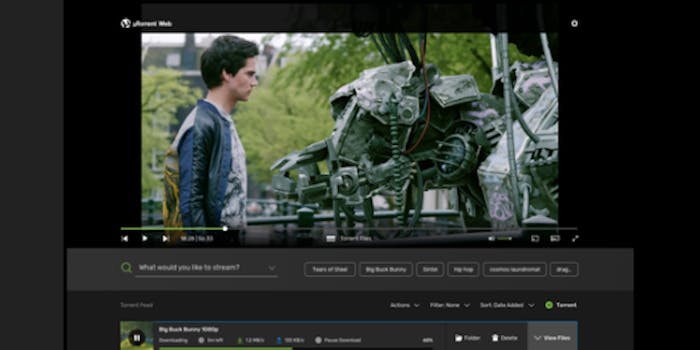 The king of torrenting sites is back.

The streaming revolution promised to put an end to all that illegal downloading and torrenting. With services like Netflix and HBO Go, you could finally gain access to all your favorite shows and movies at any time, for an affordable monthly price. Then something happened: Hulu. Amazon Prime. Disney’s streaming service. There are dozens of different streaming services now, with different content available on each. If you want it all, you’ve got to fork over the dough—and thus torrenting king BitTorrent is back.

After years of decline, Sandvine’s Global Internet Phenomena Report suggests that torrenting is on the rise again, Motherboard reports. Of total internet activity, file-sharing makes up 3 percent of global downstream traffic and 22 percent of upstream traffic. Nearly all of the latter (97 percent) belongs to BitTorrent.

Back in 2011, before streaming had become mainstream, BitTorrent accounted for 52 percent of upstream internet traffic. While it’s not back to that level of popularity, torrenting is on the rise again—largely due to streaming exclusivity.

Sandvine’s vice president of global marketing, Cam Cullen, explained the reasoning behind this in a blog post.

“More sources than ever are producing ‘exclusive’ content available on a single streaming or broadcast service,” Cullen says, citing HBO’s or Amazon’s Jack Ryan as examples. “To get access to all of these services, it gets very expensive for a consumer, so they subscribe to one or two and pirate the rest.”

Cullen notes that the reversal in BitTorrent popularity is largely shifting overseas. Between the cost of subscribing to multiple streaming outlets and dealing with regional blackouts for some content, that certainly makes sense. (If you can’t access a show in the country where you live, or at the exact time it debuts, illegal downloads might be a tempting option.) It’s also possible that Sandvine’s numbers skew low if internet users are using VPNs or proxies for their downloads.

However, trends in the U.S.—like Disney’s move to pull its content from other streaming sources like Netflix into its own streaming service—could push BitTorrent popularity higher there, too.

Regardless of how you get it, though, video rules the internet. Video makes up nearly 58 percent of all downstream internet traffic, according to the report, and 15 percent of downstream video traffic alone belongs to Netflix.