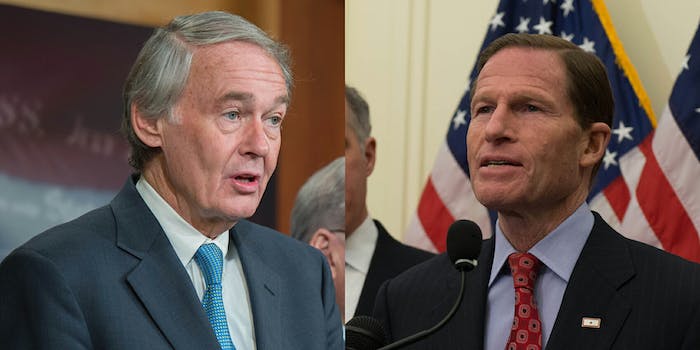 The fake net neutrality comments have been at the center of controversy for months.

Several prominent Democratic senators have asked the Federal Communications Commission‘s (FCC) Inspector General to open an investigation into the millions of fraudulent comments left on the agency’s website ahead of its controversial vote to rescind net neutrality rules last year.

Sen. Edward Markey (D-Mass.), Sen. Richard Blumenthal (D-Conn.), and Sen. Brian Schatz (D-Hawaii) wrote a letter to the FCC Inspector General earlier this week urging a look into why the agency has not addressed the issue in the wake of the New York Attorney General subpoenaing several groups as part of its own investigation into the fake comments.

The lack of urgency in the FCC investigating the flood of fake comments—which have been at the center of controversy for more than a year—”risks undermining public trust in the FCC’s rule making process,” the senators wrote.

“Although we near the one-year anniversary of the FCC’s order—longer since comments were filed—the Commission has taken no action to account for potential fraud in the rule-making process,” the letter reads. “We are concerned that the Commission has failed to address fraudulent comments and has not cooperated with other investigations. We write to seek answers regarding the Commission’s assistance with these investigations and the FCC’s own handling of the matter.”

The senators’ letter asks the FCC’s inspector general to drill down on a number of specific topics in regards to the fake net neutrality comments including:

The fraudulent comments were found to include dead people’s names and even the names of lawmakers. Other members of Congress have also raised alarms about the use of fraudulent identities in the comment period before the FCC’s net neutrality vote.

Of the authentic comments left on the agency’s website ahead of the vote, nearly 100 percent of them were in favor of keeping net neutrality protections, according to a Stanford University study.

Earlier this month, New York Attorney General Barbara Underwood announced that she had subpoenaed several telecom groups, lobbyists, and advocacy organizations as part of her investigation into the comments.

You can read all of the letter sent by Markey, Blumenthal, and Schatz here.