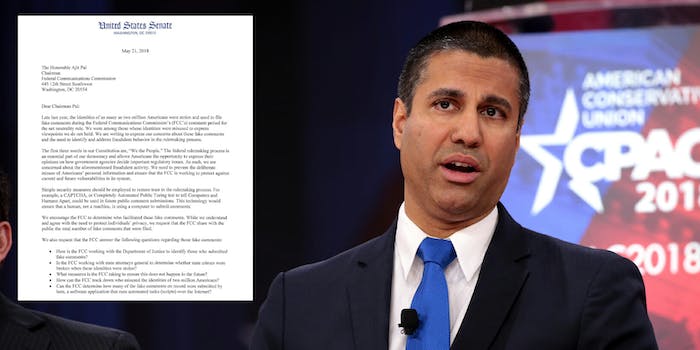 The fake comments have been criticized before.

Two senators say their identities were among the millions of fraudulent comments that were allegedly posted to Federal Communications Commission‘s (FCC) website ahead of its controversial vote to repeal net neutrality rules last year. The senators are questioning the agency about its investigation into instances of identity fraud.

Sen. Jeff Merkley (D-Ore.) and Sen. Pat Toomey (R-Pa.) sent a letter Monday to FCC Chairman Ajit Pai asking the agency to “identify and address fraudulent behavior in the rulemaking process.” The two lawmakers said both of their identities were used to make false statements ahead of the vote.

The calls from Merkley and Toomey come as a torrent of criticism has been levied against the FCC for fraudulent comments that were among more than 20 million left on its website before its vote to dismantle net neutrality rules last year.

“We need to prevent the deliberate misuse of Americans’ personal information and ensure that the FCC is working to protect against current and future vulnerabilities in its system,” the letter reads.

Merkley and Toomey suggest in the letter that the FCC consider using CAPTCHA technology to differentiate between humans leaving comments and fake ones. The two senators also asked Pai to answer several questions including:

“These Senators are asking exactly the right questions,” Evan Greer, the deputy director of digital advocacy group Fight for the Future, said in a statement. “Providing oversight for the FCC is Congress’ job.”

Last week, the Senate voted by a 52 to 47 margin to begin a process using the Congressional Review Act (CRA) that could undo the FCC’s net neutrality decision. The House of Representatives will now vote on the net neutrality CRA. If successful in the House, President Donald Trump would ultimately need to sign it to undo the agency’s decision.

Last year, lawmakers in both the Senate and the House asked for investigations into the fake net neutrality comments.

In response to the Senate’s request, the FCC said lawmakers are being “desperate” in an attempt to delay the net neutrality vote.

You can read all of Merkley and Toomey’s letter here.