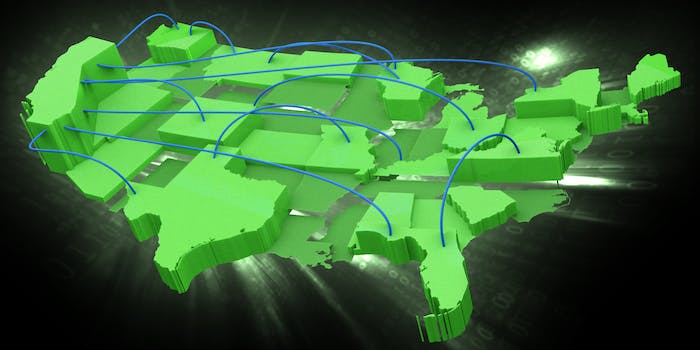 California's law prevailing in a recent legal challenge could have a ripple effect.

Now that decision could have a ripple effect across the country.

California’s law has been at the center of a years-long legal battle, with trade groups representing ISPs arguing that the law was preempted by the Federal Communications Commission’s (FCC) 2018 order that repealed net neutrality rules. The groups asked for a preliminary injunction to block California from enforcing its law, and Judge John A. Mendez disagreed—giving the state the go-ahead to enforce it.

California’s net neutrality law does much of what the FCC’s 2015 order did. It prohibits blocking, throttling, and paid prioritization of internet traffic. However, it does go further by also prohibiting “zero rating,” which is when an ISP decides that certain services or content won’t count against data caps for a customer.

The decision from the judge showed that an aggressive net neutrality bill, that’s been hailed for being more comprehensive than the FCC’s 2015 order, can prevail in court.

And that could give other states with their own potential laws a confidence boost that their laws would survive legal challenges as well.

“I think there has been some trepidation among other states with moving forward and instead put themselves in a holding pattern and ‘let’s wait and see,'” Ryan Singel, an open internet fellow at the Center for Internet and Society at Stanford Law School, told the Daily Dot. “I expect this will help states that have been on the fence move forward.”

Since the FCC’s controversial repeal in 2017, a flurry of states moved quick to fill in the gap with their own state-level laws. Some of those laws, like California’s and Vermont’s, were put on hold until a federal case challenging the repeal, Mozilla v FCC, was decided.

That decision came out in October 2019, and while it upheld a large portion of the repeal, it vacated a part of it that blocked states from enacting their own state-level net neutrality laws.

The Mozilla v FCC decision restarted the legal battle in California, culminating in Mendez’s decision last week against blocking the state from enforcing it.

That could be the kind of jump start states need to enforce their own laws, which by and large are not as comprehensive as California’s.

Vermont, in particular, has been in a waiting pattern after being sued by trade groups representing ISPs over its net neutrality law. Late last year, a judge ordered that the suit in Vermont would remain on hold until “preliminary injunction motions” for the California lawsuit “have been decided.”

Despite facing a lawsuit like California, Vermont’s law is narrower in scope. The law requires ISPs to certify that they comply with net neutrality rules and also requires state agencies to only contract ISPs that have that certification.

But state senators who introduced the law told the Daily Dot they were encouraged by ruling in California.

“Our Vermont law was crafted to be effective and constitutional. The decision in California makes me even more confident we got it right,” Tim Ashe, the former state senate president, said in an emailed statement. “Our Attorney General requested we delay implementation until our own case reaches is its own conclusion, but the California decision suggests we’ll be enforcing our law sooner than later.”

State Sen. Virginia Lyons, who was one of several lawmakers who introduced Vermont’s bill, said she hoped other states would pass their own net neutrality laws.

“I am really encouraged by what’s happened in California, no question about it,” Lyons told the Daily Dot. “Other states should go ahead … I think states really need to act and send a message to our federal government that the internet is our communications system, and it should be regulated through the FCC and not the FTC. It’s not a trade, it was never was intended to be a trade, it was meant to be a system of open communication.”

Lyons said she wanted Vermont’s law to be broader in the first place, and after the litigation ends in Vermont, she hopes to introduce a net neutrality bill that takes “the next step.”

“As soon as we can, I will,” Lyons said. “It’s so important for states to stay on top of this whole issue.”

‘Echoes’ of net neutrality decision will play out

While it’s possible bills in other states will get a boost from California’s decision, it’s difficult to say just how many will.

Singel said he didn’t expect a “flood” of laws to come down the pipeline across the country, adding that perhaps that there would be more under different “economic and public health” circumstances.

However, Singel said that the coronavirus pandemic has highlighted the importance of broadband-related laws. That, coupled with the California decision, could lead to more net neutrality bills, he said.

Matt Wood, the vice president of policy and general counsel at Free Press Action, agreed, noting that because various states across the country have different legislative sessions and priorities, it was difficult to gauge just how many laws would immediately spring up in the wake of the decision.

“It’s definitely a boost, I think the difference between the big states and a lot of the other states is you have less full time enforcement capabilities. Not every state has as many people as California to throw at a problem,” Wood said. “When it comes to states with new laws, not every state even has a year round legislative session. I think that’s why you will see the echoes of this very encouraging news play out in a lot of places but not in the same way in every state.”

While the California decision many not have an immediate impact across the country, more states deciding to enact their own net neutrality laws could have ramifications at the federal level—and perhaps presents a different strategy for net neutrality.

There’s been a lot of speculation about the future of net neutrality with a Democratic-controlled FCC and Congress. It’s been widely speculated that the FCC will reinstate the rules under Democratic control and just last week Sen. Ed Markey (D-Mass.) said he intended on introducing net neutrality legislation in Congress.

But, if a net neutrality bill is introduced, it almost assuredly would have to recognize just how comprehensive California’s is.

With a strong, widely hailed, net neutrality bill officially on the books in California, lawmakers in the Senate and the House of Representatives from the state wouldn’t have much incentive to vote for a lesser bill at the federal level.

If more states begin passing laws like California’s, it raises the bar for what a federal bill would have to look like. Meanwhile, ISPs have railed against a “state-by-state” approach to net neutrality bills in the wake of the California decision.

Wood said California’s law prevailing in court was a win for California residents but also the politics surrounding net neutrality.

“You have really strong rules in the most populous state in the country. I wouldn’t want to undersell the protections granted by the state law and the good work that was done there. But that sort of signaling function and that political and legal tone-setting both at the state level and federal level is another important part of this very big win,” Wood said.

While a lot of the focus on net neutrality restoration has been at the federal level, states may have more to say about it than initially thought.