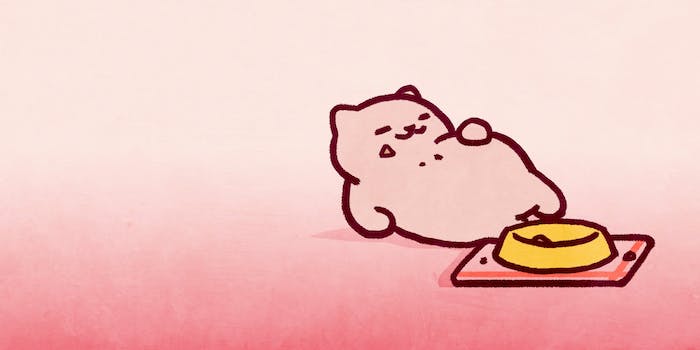 The secret to collecting all the cats on Neko Atsume

Your milkshake won't bring all the cats to the yard. Try this instead.

Collecting virtual cats is the prime objective of Neko Atsume, a ridiculously addictive Japanese mobile game that for many of its players doubles as stress relief. Once you download the app, you can fill your virtual yard with treats and toys in the hopes that a few cats will drop by. But virtual felines are often as capricious as their IRL counterparts.

You may find your bowls of Frisky Bitz going uneaten, or the soccer ball you shelled out top goldfish for remaining untouched. Honestly, there are few sights sadder to behold than an empty yard on Neko Atsume.

Don’t let this be you: Coaxing rare cats to pay you a visit is a task in itself. Of the 53 total cats on Neko Atsume, 19 felines of the blue-blooded variety are considered “rare.” Many of these rare cats don interesting head gear and possess the personas of famous people. There’s a cowboy hat clad Billy the Kitten, Ramses the Great, and even a Chairman Meow. These fancy cats are trickier to lure since they favor specific foods and toys.

Here’s a complete list of the rare cats of Neko Atsume below: 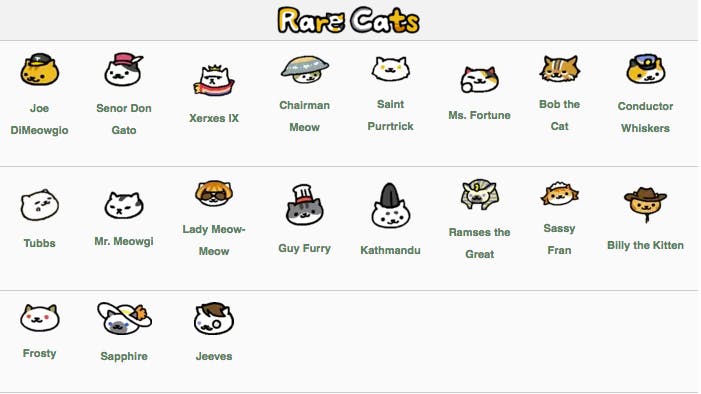 Also at play are each Neko Atsume cat’s individual power level. The higher a cat’s power level is, the more frequently he’ll visit.  Cats with higher power levels chase off other cats they outrank.

frisky bitz side vs thrift bitz side lol #ねこあつめ pic.twitter.com/Tt9jSXJAb1

Thrifty Bitz is the feline equivalent of the Lean Cuisine that’s been in your freezer for the past year—it’s what cats eat when there’s no alternative. Thrifty Bitz is so bad that Neko Atsume literally gives it away; the game gives you a unlimited supply. If you’re suffering from empty-yard syndrome, it’s probably because you’re only serving Thrifty Bitz.

There are five other meals available on Neko Atsume, ranging from sashimi to the uber-pricey Deluxe Tuna Bitz (a virtual cat magnet), but they all require you to pay up in goldfish. Luckily, cats who visit will leave you “gifts,” and not of the litterbox variety. Neko Atsume cats will pay you back in gold and silver fish. In short, shelling out more for better-quality food is an investment.

That being said, splurge on the most expensive stuff sparingly. As Recombu notes, cats aren’t more likely to give you more fish for the top-dollar stuff (Ritzy Bitz, Deluxe Tuna Bitz) compared to the less expensive but high-quality Frisky Bitz. By all means, if you have the gold fish to spare, go for the pricey grub. But if you’re strapped for cash, a bowl of Frisky Bitz at 30 silver fish a pop will go a long way.

Get a yard expansion

Neko Atsume restricts new players to a small yard with a flower pot and porch. It’s a scant patch of land that won’t allow for more than one bowl of food and a few toys. If you spring for fancy cat furniture and cat cushions, both huge draws in the world of Neko Atsume, it will get crowded fast. But with a yard expansion, you’ll be able to put out more bowls of food and bigger and more exotic toys, like a cat choo-choo train.

At 180 gold fish, you’ll have to save up for a yard expansion. But the purchase pays for itself. The more space you have, the more cats can visit it at once. Pretty soon, it’ll be a regular feline boondoggle.

Cater to specific cats with toys and cat furniture

The rarer cats tend to veer towards fancy furniture or toys. If you’re looking for a specific rare cat, it’s likely they have a favorite toy or perch to which they’re inclined.

Here’s a partial list of rare cats and their favorite goodies:

Joe DiMeowgio: This baseball-playing cat will come by if you buy a baseball from the Neko Atsume shop. He’ll even autograph it for you if you’re lucky.

Conducter Whiskers: Snag a locomotive and this kitty will come a-running.

Chairman Meow: If communist kitties are more your flavor, be sure to splurge for an earthenware pot.

#ねこあつめ HIS NAME IS CHAIRMAN MEOW OMG I LOVE pic.twitter.com/NMaLjFkM4d

You can view a full list of rare cats and the treats and goodies that attract them on the Neko Atsume Wiki.

If it’s sheer quantity of cats you’re after, be sure to buy the Cat Metropolis. The pricey structure can hold up to six cats. Not only will Bob the Cat, the famous mountain-climbing cat, be sure to pay you a visit, but you’ll be treated to the sight of multiple kitties lounging on your metropolis.

Recombu also offers this method for getting as many cats as possible in one space for an awesome group photo for your cat book:

“If you want to get as many cats as possible together for a photo op, it’s simply a case of putting down all four of the cubes – Orange (320 silver) Navy Blue (320 silver) Tiramisu (28 gold) Dice (32 gold) – as well as the Giant Cushion (25 gold). These mega-cushions can have up to two cats on them at once, but they only occupy one space in the garden.”

Decide what you want to do about Tubbs

Neko Atsume: Tubbs
(Still can't decide if I hate him or love him)
ib: spookymoose
//… (Vine by hell edits) https://t.co/V2DTusSOoI

Tubbs is the Donald Trump of the Neko Atsume universe—a polarizing figure, as loathed as he is revered. There are Tumblrs devoted to hating Tubbs. There are Tubbs-apologist sites and even initiatives to stop body-shaming Tubbs.

Tubbs is a big white rare cat who will show up and eat all your food. He will then pay you a ton of gold fish in return for eating the equivalent of five other cats. The first time this happens, you’ll discover where on the Tubbs spectrum you fall.

Tubbs supporters will argue that even though he devours an entire food bowl in one sitting, thus detracting other cats, he is also the most generous of all Neko Atsume cats. While a Tubbs visit will require you to re-up your food bowl, you may be grateful for the pay-off you’ll get in return.

But let’s say you’re sick of surprise visits from Hurricane Tubbs and want to shoo him away. You can fill up the food bowl again, which will make him leave (it appears even Tubbs has limits, or is suffering from indigestion), but you will earn even more fish if Tubbs leaves on his own.

If you don’t want Tubbs to come by at all, try putting all of your food inside the house. Warning: This method of detracting Tubbs will only work if you haven’t purchased a “Giant Cushion.” As the Neko Atsume Wiki points out, Tubbs is partial to the Giant Cushion as it’s the only cushion that fits him.