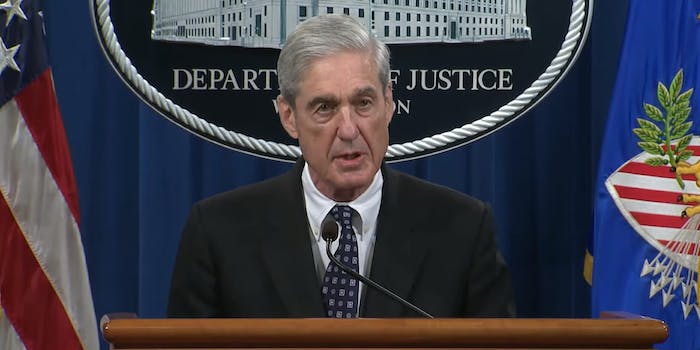 It's the first time Mueller has spoken since the investigation launched.

Today, Special Counsel Robert Mueller held a press conference where he reiterated the findings of his investigation into the 2016 election, calling Russian efforts to interfere real, and saying they should be of the utmost concern.

He even concluded his press conference with a warning to the American people, saying there were “multiple, systematic efforts” to interfere in the election and that deserves the attention of “every American.”

So naturally, everyone wanted to talk about President Donald Trump. In the conference, Mueller reiterated a claim from his report, which said that if they had determined the president had not committed obstruction of justice, they would have cleared him.

In the wake of the report’s release, Trump has repeatedly claimed that there was “no obstruction” found by Mueller, so this was somewhat a rebuke of that.

Mueller is talking about the obstruction part of his investigation. Repeats that he would have said so if he had confidence the president did not commit an obstruction crime.

"If we had confidence that the president did not commit a crime, we would have said so," Mueller says, then goes on to say a president cannot be charged while in office.

Mueller said though that, because of Department of Justice policy, charging the president with a crime was “not an option we could consider.”

And left-leaning Twitter read a lot into the press conference, claiming it was Mueller signaling for Congress to begin impeachment proceedings.

Mueller is *explicitly* saying that if it weren’t for the DOJ policy that The President of the United States is above the law, he would be indicted and prosecuted.

We were constitutionally barred from charging the President with a crime but are explicitly stating that we did not conclude that he didn’t commit crimes is not exactly a glowing endorsement.

Shorter Mueller: That was an impeachment referral, damnit, now act on it.

this is a cry for impeachment

How many more signals do House Democrats need before they do their constitutional duty?

Mueller statement that there are other constitutional remedies aside from prosecution for POTUS' behavior an obvious nod to Congress and an indication that ball is in Pelosi's court.

At least one member of Congress agreed. Rep. Justin Amash (R-Mich.) has been vocal about impeachment in the past and agreed Mueller was sending a message.

The ball is in our court, Congress. https://t.co/idpQo1xItH

The president had his own view of the presser.

Nothing changes from the Mueller Report. There was insufficient evidence and therefore, in our Country, a person is innocent. The case is closed! Thank you.

There is also the chance Mueller wasn’t sending secret signals and really does want the nation to focus on Russian election interference.

But good luck with that.