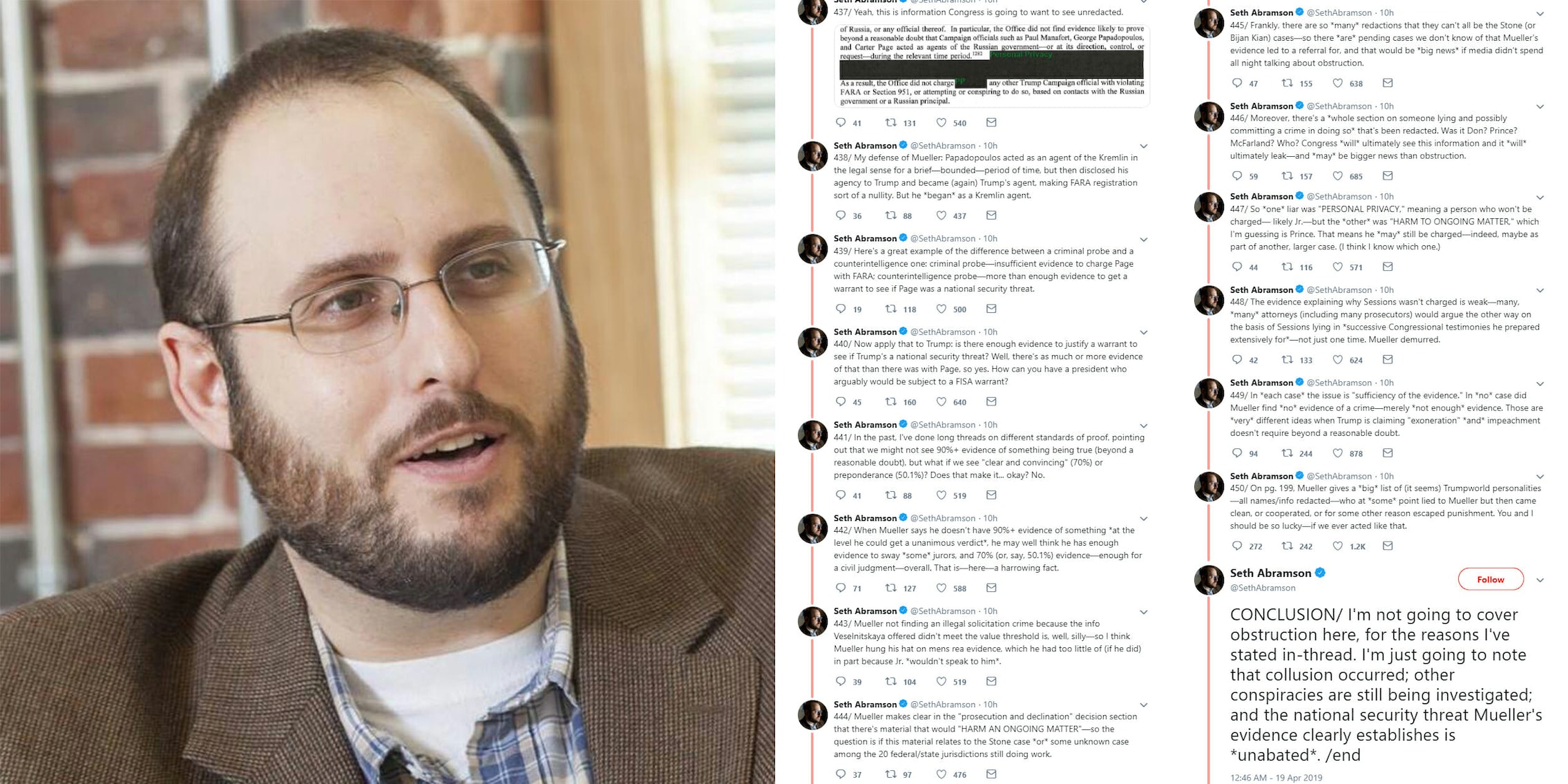 Twitter was taking bets how long this would go on.

Yesterday’s release of Special Counsel Robert Mueller’s long-awaited report on Russian interference in the 2016 election was a Rorsarch text for the extremely online.

If you’ve long been touting that President Donald Trump is innocent of all charges, you saw complete exoneration. If you’ve felt the president obstructed justice—a charge worthy of impeachment—Robert Mueller presented a roadmap.

And if you’ve spent the past years convinced that an elaborate Kremlin-backed operation to install a Manchurian president inside the White House unfolded before our very eyes, well, the report did not show that. On that, we can all agree on.

Abramson is a lawyer and professor who has long connected the dots between Trump and Russia, doing so in extended Twitter threads that go for days on end, stretching the fabric of spacetime, coming whenever some minuscule news about Mueller’s investigation dropped.

It’s become a running gag, but Abramson’s been able to profit off it, publishing a book, Proof of Collusion, that is literally a compendium of his Twitter threads.

So when Mueller’s report dropped, everyone awaited what Abramson would do. Would he admit that since the former director of the FBI didn’t reveal an entire spy operation out of Moscow, he was somewhat hyperbolic in his theories, doffing his cap and quietly fading away?

Or would he dig the fuck in?

1/ I want to start by offering my @Newsweek column from today (April 17), which sets the stage for what the Thursday (April 18) release of the Mueller Report will and will not be: https://t.co/MYjasBrTAK

It began at (1/) and people immediately wondered how high it could go.

Even data guru Nate Silver got in on analyzing its length.

He's currently tweeting a pace of 2.45 tweets per page of the Mueller report, which means this thread is on track for being 1,089 posts long. https://t.co/KeHIqjto9L

Since I posted this, he's taken almost 35 tweets to get through the 5- or 6- page section on Carter Page, and isn't done with it yet. Really picking up the pace. I think we could be headed for 1,200 tweets or more. https://t.co/vOF983N63r

And it became the stuff of memes.

Seth Abramson’s family standing in the doorway of his Thread Posting Room, begging him through tears to take a break

The greatest gift of the Mueller Report is that Seth Abramson is about to hit 300 tweets in a single thread on its findings.

You'll always remember where you were when Seth drops tweet #300. pic.twitter.com/Wsuyv0h7vF

Eventually, toward the end of the day, it hit the finish line, at tweet 451,

Fahrenheit 451, anyone? Seth Abramson is clearly signaling that Trump is going to establish a totalitarian regime and burn all our books (particularly Harry Potter).

You might be wondering with an entire blog post being written about a Twitter thread, why you haven’t seen but a single one of the tweets from the thread.

Good question. It’s truly a testament to how off the wall, speculative, buried in minutiae, and just downright unnecessary the entire exercise is that you don’t need to read any of the 451. Not one.

But… fine. If you wanna get a sense of it, here you go.

368/ Gerson told Dmitriev the Russia-UAE-Trump meetings had to be secret. Why? Because he knew they were wrong. Mueller even *says* Gerson knew they were wrong—negotiating foreign policy under no color of authority to do so, which is a Logan Act violation.

Who is Gerson? Who is Dmitriev? I don’t know, and I cover this stuff for a living. While it’s likely there’s more to be revealed, with a dozen redacted referrals from Mueller’s investigation, speculating about whether Erik Prince is a CIA asset and repeatedly demanding he be indicted doesn’t serve any purpose.

Adding up all the tweets, Abramson wrote over 20,000 words yesterday about the Mueller report. Which is genuinely nuts. Unless you take the wisdom of one of my good friends, who messaged me about the thread yesterday.

“Well, next book isn’t going to write itself.”

Look for Collusion, PROVED in stores this summer.