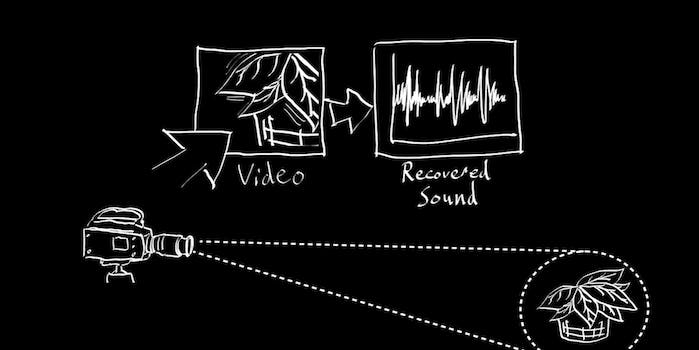 We're never going near a bag of chips again.

As reported by MIT News, the group developed an algorithm capable of extracting sound data from silent video—sound data that would otherwise be totally inaudible.

In one example, the researchers played “Mary had a little lamb” while taking a silent high speed video of a house plant. The song’s vibration caused the plant to move in a way completely imperceptible to the human eye—image a leaf swaying only 1/100th of a pixel. Still, the plant’s micro-movements were enough for the researchers, who managed to extract full sound from the silent video—they were able to recreate “Mary had a little lamb” in full.

Not mind-bending enough yet? In another trial, the researchers placed a high speed camera behind sound proof glass where it shot video of a bag of chips laying on the ground. Beyond the sound proof glass window, they recited the lines of the same song. The vibrational detail extracted from the bag of chips was so subtle that it was able to fully reproduce the human voice in spite of the video having no sound data whatsoever.

It’s a lot to wrap your head around, but happily the team was kind enough to lay it out in a video, embedded below.

“We’re scientists, and sometimes we watch these movies, like James Bond, and we think, ‘This is Hollywood theatrics. It’s not possible to do that. This is ridiculous.’ And suddenly, there you have it,” Alexei Efros, an associate professor of engineering and computer science at Berkeley, told MIT News. “This is totally out of some Hollywood thriller. You know that the killer has admitted his guilt because there’s surveillance footage of his potato chip bag vibrating.”