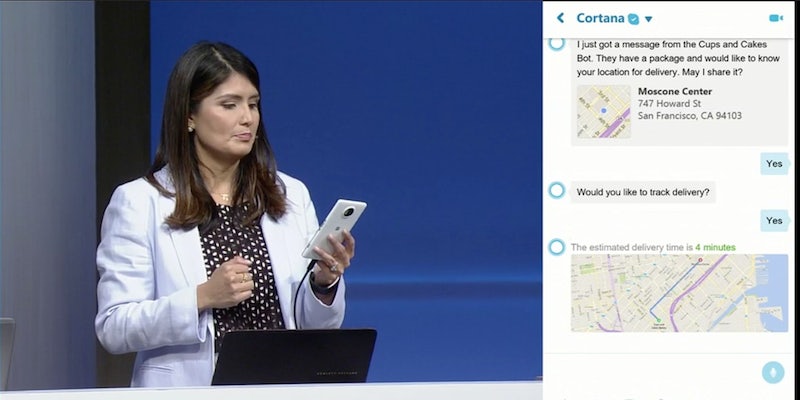 Remember the days of AOL Instant Messenger and the archaic bots that you could talk to? Microsoft is looking to create their spiritual successors and integrate them into every chat platform imaginable, starting with Skype.

During the keynote address of the computing giant’s annual Build conference, Skype program manager Lilian Rincon showed off the next generation of the video communications app, which will have users talking to artificial intelligence as much as actual people.

One of the primary drivers of non-human interaction is Cortana, Microsoft’s voice assistant who has been integrated into just about every nook and cranny of the company’s ecosystem. She’s kept readily available at all times and is able to provide the expected services, like dictating a message and creating reminders.

More interesting, though, is Cortana’s role in managing conversations with third-party bots. The voice assistant communicates with users through messages, and brokers interactions between the user and bots that are providing information.

In a demonstration of the feature, Rincon showed Cortana passing along information about a food order. Cortana explained that the order was ready for delivery, asked if she could provide location information, and generated a card that displayed a map of the delivery route and expected time of arrival.

The conversation with Cortana appeared fluid, with the assistant taking voice commands, confirming information and making suggestions, and pulling in third-party services when necessary to complete other tasks.

Microsoft’s plan is to take its A.I. beyond just the text box, though; it wants to integrate it into video communications as well. Details on what Rincon called “Skype video bots” were sparse, but she promised they would “reinvent the way that friends, family, and businesses get together.”

Developers will have access to Microsoft’s Skype Bot software development kit (SDK) starting on Wednesday. Also beginning on Wednesday, users will also be able to start talking to bots in the Skype app for Windows, iOS, and Android.

Here’s hoping things go better for the bots on Skype than it did on Twitter.