Microsoft caught paying YouTubers to promote the Xbox One

Machinima partners got $3 per 1,000 views to say nice things about Microsoft's newest console.

Who needs traditional advertising or video game conventions when you can just shell out some cash for positive reviews?

Over the weekend, it was revealed that Microsoft offered partners of Machinima, YouTube’s biggest gaming network, a payout for including Xbox One content in their videos. According to Machinima’s feed on Poptent, partners were offered $3 CPM (cost per thousand views) to promote the Xbox One and its games around the time the console was released in November. 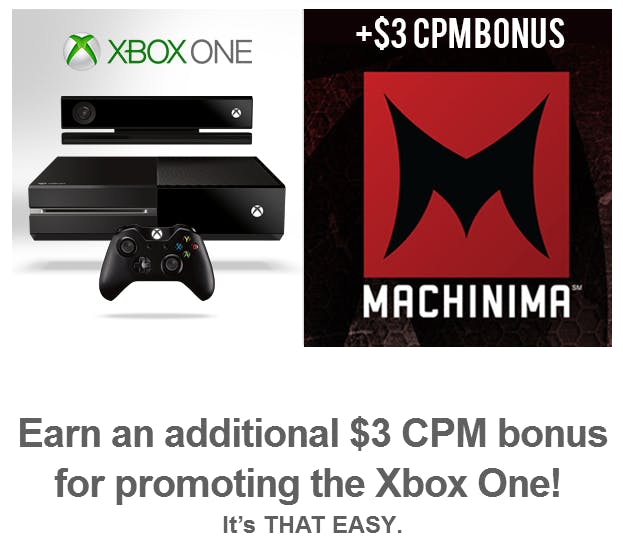 The offer came to light after Machinima’s U.K. community manager, Ron Smith, posted a now-deleted tweet of the promotion.

Partners participating in the promotion were required to mention “Xbox One” by name, include at least 30 seconds of game footage, and include the tag “XB1M13” on their video. Many of the videos with that tag are now about the controversy, but some of them participated in the promotion.

If Microsoft had just paid Machinima partners to talk about Xbox One, it wouldn’t be too out of the ordinary. What’s raising eyebrows in the gaming community is the wording of the contract that YouTubers had to sign in order to participate in the promotion.

A leaked copy of the contract found by Ars Technica states that videos made by partners have to be positive in nature: “You may not say anything negative or disparaging about Machinima, Xbox One or any of its Games in your Campaign Video.”

Machinima partners are also not allowed to talk about the contract they signed or disclose it to anyone.

“You agree to keep confidential at all times all matters relating to this Agreement, including, without limitation, the Promotional Requirements, and the CPM Compensation, listed above.”

But the attempt to keep the campaign secret appears to have backfired. Discussion of the promotion on YouTube and around the Internet now far outweighs the attention paid to the videos themselves.