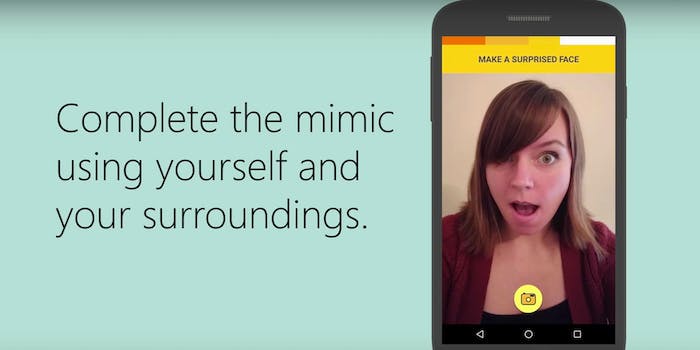 Microsoft: Forcing you to get up, even when you don't want to.

If mornings aren’t really your thing, then you’re either going to be extremely grateful or unendingly annoyed by Microsoft’s new app. The Mimicker Alarm will have you active first thing in the morning just to get the damn thing to shut up.

The free Android app, the latest to roll out of Microsoft’s experimental Garage Project, begins blaring when it’s time to wake up. To make it stop, the groggy user must mimic a particular behavior dictated on screen.

Required tasks range from making a face and taking a selfie to saying a tongue-twister and locating an object of a particular color.

Do those things sound like the last thing you’d want to do the moment you regain consciousness in the morning? Good—that’s the point. If only it kept ringing until you proved you’d made a pot of coffee, so at least you’d have something to show for all your effort.

Mimicker Alarm uses Microsoft’s Project Oxford, a platform for artificial-intelligence APIs behind a litany of other quirky projects. This collection of services powers Microsoft’s age-guessing tool How-Old.net, its twin-spotter, and an emotion-detecting app.

The alarm app’s code is open source, so anyone can play around with it and contribute tasks to the app’s repertoire.