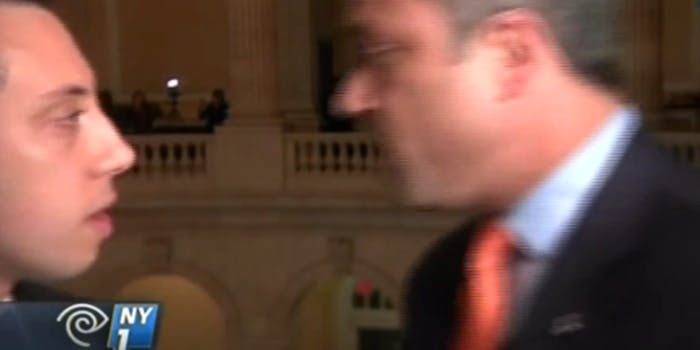 Congressman threatens to throw reporter off balcony, break him in half

President Obama called for a "year of action" in his speech, and Rep. Michael Grimm got an early start.

In his State of the Union address, President Barack Obama called for a “year of action.” Shortly after the speech, Rep. Michael Grimm (R-NY) took those words to heart in an interview with NY1 Capitol Hill reporter Michael Scotto.

Grimm, a former FBI agent, has been part of an ongoing federal investigation in connection with illegal campaign fundraising, and after Scotto attempted to transition from questions about the SOTU address to the current investigation, Grimm cut him off and walked off camera. Then he came back. NY1 posted this transcript of what happened next:

“What?” Scotto responded. “I just wanted to ask you…”

Grimm: “Let me be clear to you, you ever do that to me again I’ll throw you off this f—–g balcony.”

Scotto: “Why? I just wanted to ask you…”

Grimm: “If you ever do that to me again…”

Grimm, who does look an awful lot like Ray Liotta, quickly issued a statement, claiming he was “annoyed” at Scotto for straying off topic, adding that “I doubt that I am the first Member of Congress to tell off a reporter, and I am sure I won’t be the last.”

Rep. Grimm delivered the only GOP response anyone will remember tomorrow.

Rep. Grimm should know if you break a reporter in half that just makes more of them because they reproduce asexually.

Here’s Staten Island @RepMichaelGrimm about to fucking karate chop this kindly old lady in half. Like a boy. pic.twitter.com/JxKuYCp90Q

Robert Hardt, NY1’s political director, is asking for a “full apology” from Grimm.