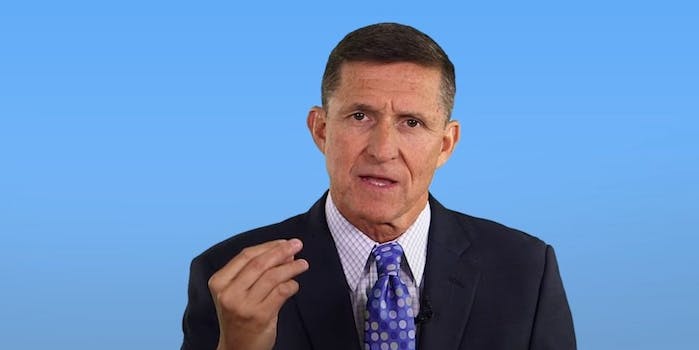 The gamble could lead to additional charges being filed against him.

Former national security adviser Michael Flynn filed a motion to withdraw his guilty plea in the case accusing him of lying to federal agents.

More than two years after pleading guilty to lying about his contacts with foreign entities in exchange for cooperating with the Russia investigation, last night, Flynn filed a motion to withdraw his plea and take his chances at trial. Flynn, a retired Army lieutenant general, was fired just 23 days into his tenure as President Donald Trump’s national security adviser for lying to Vice President Mike Pence about conversations with the Russian ambassador.

The about-face in the case comes after months of Flynn increasingly clashing with federal agents, prosecutors, and the judge, who has admonished him for claiming that FBI agents had tricked him into lying.

In the motion, his attorneys, led by former federal prosecutor Sidney Powell, who the New York Times notes sells anti-special-counsel T-shirts online, argue that “the government’s bad faith, vindictiveness, and breach of the plea agreement” justifies vacating the plea.

Flynn has pled guilty not once, but twice, in the case.

Flynn fired his prior counsel last year. Since then, his legal strategy has morphed to include making baseless accusations against federal agents and prosecutors, many that have been circulated by unscrupulous conservative media and commentators.

The chances of the court overturning his plea seem slim. In December, the judge rejected Flynn’s argument that he was “trapped” into pleading guilty by the misconduct of FBI and prosecutors.

Nevertheless, Flynn supporters were thrilled by his request to withdraw the plea. The right has long circulated false tales of Flynn being set up by the so-called deep state. Many seem to have been further emboldened by Trump’s seeming support for his ousted adviser.

Celebrations rang across far-right social media. “Hallelujah!” tweeted one. Another said that Flynn had pleaded guilty to “a ‘crime’ he never committed.” Fringe right-wing outlets wasted no time spinning the news in his favor, most neglecting to mention that the move is a high-stakes gamble that could lead to additional charges being filed against Flynn.

Others noted the irony that, after his extensive cooperation with the Russia investigation, and numerous admissions of guilt, Flynn would now essentially argue that he was lying about all that.

Sentencing in the case is set for Jan. 28. Prosecutors have recommended a jail sentence of six months.

In the unlikely event that the court grants Flynn’s Hail Mary motion to withdraw his guilty plea, the case will proceed to trial at a later date.