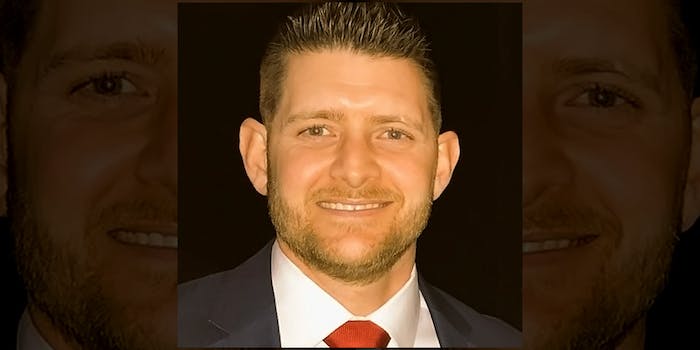 Why is Michael Flynn Jr. still trying to be an ‘alt-right’ icon?

Why is he still tweeting?

Many of the faces spotted in the Trump Tower lobby during Donald Trump’s presidential transition have toppled from power, but none has fallen further than General Michael Flynn, who went from key transition and West Wing official to possible future federal prison inmate.

But if you look closely at those photos of Flynn in the gilded lobby, you’ll spot a scruffy boyish presence lingering over his shoulder. That mug belongs to Michael Flynn Jr., a young man with a spot on the transition team and the promise of a comfy White House job.

It only takes one White House gig, no matter how short, to land you regular face time on a cable network or maybe even a fat lobbying contract—just ask the Mooch or Gorka. But Flynn Jr, who has an infatuation with conspiracy theories and the “alt-right” figures peddling them, was quickly tossed from the Trump team after his online activity landed under the spotlight.

In the past year, he’s only doubled down and this week was indicative of Flynn’s love of far-right memes and internet culture.

Flynn Jr. went full-force in his Twitter fit last Friday with a string of tweets flying under the hashtag #ReleaseTheMemo and #MemoDay. The memo—a controversial report from Trump ally Congressman Devin Nunes—was derided as a “dud” by left-leaning pundits and a large swath of conservative commentators. But Flynn Jr. tweeted “THIS IS UNBELIEVABLE! I WANT JUSTICE!”

He also argued that the FBI/DOJ “literally worked with HRC/DNC to take down [Donald Trump].”

His antics extended into the night as the general’s boy celebrated the final hours of #MemoDay by reminding his followers that the United States intelligence community are a foaming-at-the-mouth gang of Hillary Clinton die-hards.

The memo hashtag had been pounced on by far-right conservatives, but it wasn’t the only time he tried to ingratiate himself with fringe lunatics and it’s tough to figure out just what he thinks he’s accomplishing.

Flynn Jr. first came to the press’ attention after pushing the Pizzagate conspiracy theory. And he did so even after a North Carolina man drove to Washington, D.C. and fired his gun in a pizza shop that he believed to be harboring an underground child-sex ring. Those tweets led to his dismissal from the Trump transition team.

But nothing’s changed. He was recently spotted hanging out at a far-right event, “A Night of Freedom,” hosted by Mike Cernovich. But in the promo for the event, Cernovich didn’t even promote Flynn Jr.’s presence.

While the community has a few flourishing websites, their narrative is mostly amplified on YouTube and Periscope. The politics and beliefs of the “alt-right,” the group of conservatives that harbor white supremacists, are formed on wide-reaching channels in which the group’s heavy hitters like Cernovich, Baked Alaska, Paul Joseph Watson, Richard Spencer, and Stefan Molyneux hash out their philosophy. The guests and hosts regularly trade appearances on each other’s “shows,” but Flynn Jr. has been noticeably absent from that platform. He’s certainly not one of the key “influencers” of the movement—mostly he just pushes things that catch his eye.

While the others are able to piece together bits of truth to weave a web pointing at an insidious deep state, Flynn has never been creative on his own. The Marco Rubio-is-a-coke-addict theory came from a right-wing blog, Flynn just tweeted it out.

And while the Pizzagate echo chamber had many voices who put together the story, Flynn wasn’t one of them.

So why has he sacrificed his future to the cause of the alt-right?

In Washington, image consulting and crisis management is a cottage industry and Flynn probably could have pulled a few quick moves to reinvent himself as a staunch conservative with a hearty admiration for the heartland and the constitution. Sebastian Gorka was tied to a Hungarian neo-Nazi party and he still managed to revise his image enough to spin a Fox News contract.

Instead, he’s further aligned himself with the fringe-right fanatics who have dominated a certain narrative in the Trump era, despite the fact that he’s not one of its pioneering voices

Even if he didn’t want to land a lucrative contract, his outspokeness is still odd. His father is cooperating with Robert Mueller’s team. Flynn has expressed concern over the possible actions that the special counsel might take against his son and it’s even possible that he took the plea deal with Mueller’s men in an attempt to protect Flynn Jr. People familiar with Mueller’s probe told GQ that Flynn Jr.’s name has been floated in conversations with investigators.

Most of the people who find themselves caught in the at times Kafkaesque Russia probe have decided to lie low. Paul Manafort, who hustled the political game with the best of the them, is on house arrest and his lawyers have filed avalanches of briefs hoping to lessen the possible penalty their client may face. George Papadopoulos is hiding on the fringes and cooperating with the special counsel. His fiancé insists that Papadopoulos was only a pawn in the grand Trump scheme, telling CNN “he didn’t take any initiative on his own without campaign approval.” Even Trump has never tweeted Mueller’s name.

Flynn tweet’s about the Russia investigation all the time.

Recently, Mueller’s team filed to delay Michael Flynn’s sentencing, indicating that their probe probably isn’t wrapping up any time soon. And while the former Army general is cooperating with the investigators and could get off with a light sentence, it certainly doesn’t help that his son is pushing conspiracy theories and blasting out hashtags like the #releasethememo. Of course, we like to think that the FBI isn’t vindictive and won’t take Flynn Jr.’s tweets into account when the judges hand down the sentence.

But the younger Flynn seems to think they’re a crooked crew, why in the hell is he hurling bombs in their direction?