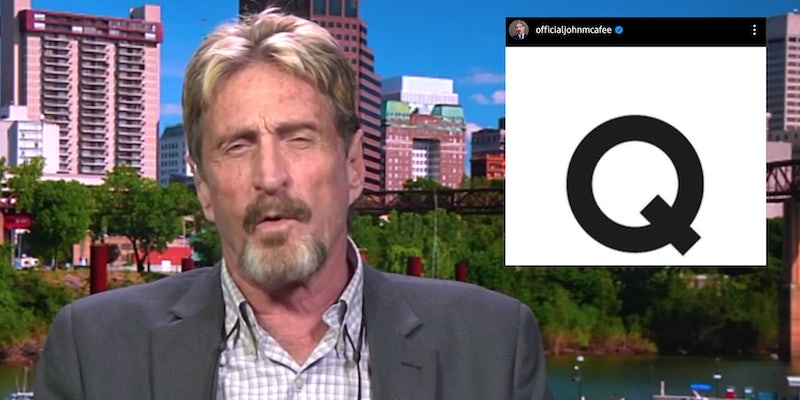 The antivirus pioneer was found dead in a Spanish prison cell earlier that day.

The Instagram account of John McAfee posted a giant letter “Q” on Wednesday shortly after the antivirus pioneer was found dead in a Barcelona prison. The account appeared to be deleted shortly after.

McAfee, who Spanish officials say died by suicide, had just been approved the day prior for extradition to the U.S. on tax evasion charges.

The tech mogul’s death was immediately met with conspiracy theories due to old tweets in which McAfee claimed he would never take his own life.

The situation only intensified after the letter “Q” appeared on his Instagram, which many believed was in reference to the QAnon conspiracy theory.

Other posts from the account suggest that McAfee was not the only one with access to his Instagram page as well. Some have speculated that members of McAfee’s team made the post, while others suggested that the post could have been scheduled by McAfee himself in order to troll conspiracy theorists one last time. McAfee had poked fun at QAnon numerous times in the past.

On Thursday morning, however, the “Q” post and all of McAfee’s verified account were gone. The account’s page now says “Sorry, this page isn’t available.”

Instagram, which is owned by Facebook, announced last year that it would crack down on QAnon-related content by limiting the spread of related pages, groups, and accounts.

Specifically, Instagram stated that it would de-rank and limit algorithmic recommendations for QAnon-related content and remove any discussions involving violence or advertisements related to the conspiracy theory.

The Daily Dot reached out to Instagram to inquire whether it had removed McAfee’s account but did not receive a reply by press time.

However, judging by the policies Instagram enacted, it doesn’t seem like simply posting a letter “Q” would be subject to QAnon-related enforcement.