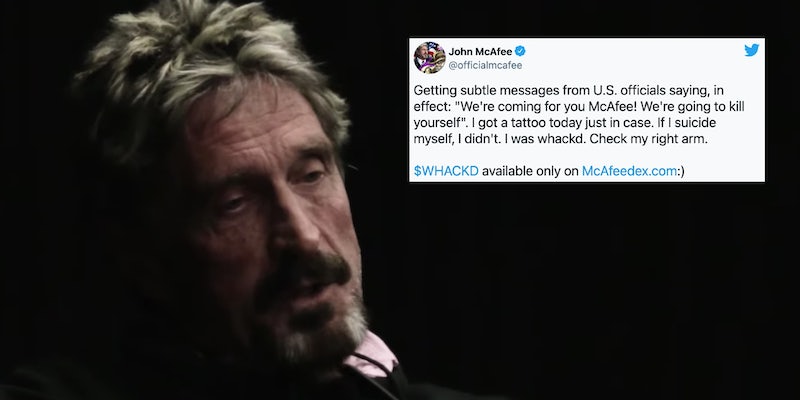 ‘If I suicide myself, I didn’t’: John McAfee’s death sparks conspiracy theories after old tweets resurface, giant ‘Q’ posted to his Instagram

‘Know that if I hang myself, a la Epstein, it will be no fault of mine.'

Old tweets made by antivirus pioneer John McAfee are spurring conspiracy theories online after the 75-year-old was found dead in a Barcelona prison on Wednesday.

Spanish officials say McAfee, who was being held following his arrest in October, took his own life just one day after a Spanish court approved his extradition to the U.S. over tax evasion charges.

The tech mogul’s death has since sparked widespread speculation, with many citing previous tweets from McAfee as proof of nefarious intent.

McAfee claimed in a November 2019 tweet that he had been receiving subtle threats from U.S. officials while showing off a new tattoo allegedly designed to showcase his vow to never kill himself.

“Getting subtle messages from U.S. officials saying, in effect: ‘We’re coming for you McAfee! We’re going to kill yourself.'” McAfee alleged. “I got a tattoo today just in case. If I suicide myself, I didn’t. I was whackd. Check my right arm.”

The term #McAfeeDidntKillHimself became a top trend on Twitter Wednesday evening as well.

Lost in the conversation, however, was the fact that “whackd” was actually the name of a cryptocurrency launched by McAfee in order to cash in on the “Epstein didn’t kill himself” meme.

McAfee, who was also facing fraud charges related to alleged cryptocurrency scams, promoted whackd in at least 20 other tweets.

But there does appear to be one tweet in which McAfee actually commented directly on suicide. In October of last year, McAfee stated that he was “content” in the Barcelona prison and had no intentions of taking his own life.

“I am content in here. I have friends. The food is good. All is well,” he tweeted. “Know that if I hang myself, a la Epstein, it will be no fault of mine.”

It should be noted that McAfee’s reported suicide came after he learned that he would be transferred to an American prison and away from the environment in Spain that he claimed to have enjoyed.

To make matters worse, moments after the news of his death began to circulate online, someone in control of McAfee’s verified Instagram account shared a giant image of the letter “Q.” The post was seen by many as a reference to the QAnon conspiracy theory which alleges that former President Donald Trump was secretly battling a global cabal of child-eating pedophiles.

McAfee’s Instagram has since been taken down. The Daily Dot reached out to Facebook, which owns Instagram, to inquire about the post and whether it violated the platform’s policies on misinformation but did not receive a reply by press time. It remains unclear what the purpose of the “Q” post was.

McAfee had made numerous references to the Q conspiracy theory over the years, but never in a serious manner. Instead, McAfee appeared to frequently troll followers of Q by arguing that he was more important than the mythical internet character.

No available evidence at this time suggests that McAfee’s death was caused by anything other than what was officially reported.

In a post on Twitter Sunday, McAfee’s wife Janice asserted that although her husband was “undeterred from continuing to speak truth to power,” his eight months in custody had taken a toll “on his overall health both mentally and physically, as well as financially.”