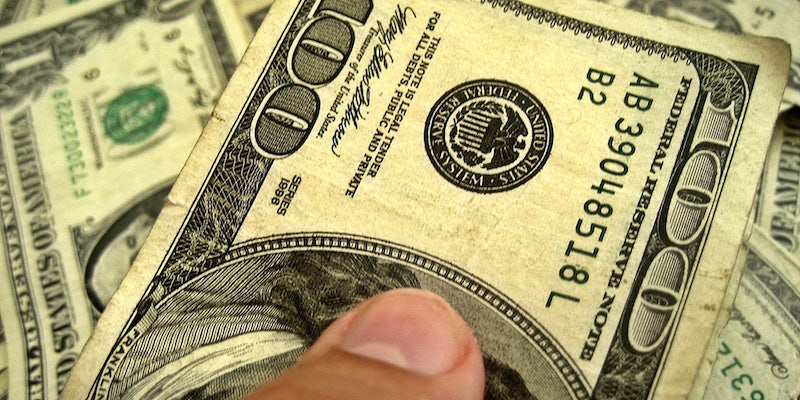 How an anti-capitalist joke app hit no. 1 in the App Store

The recipe for App Store success? Dollar dollar bills ya'll... and a critique of the capitalist system

The game is simple: You swipe up. Dollar bills go flying. Keep swiping, and the dollars keep accumulating. Once you get enough money, you can spend it on investments. Make It Rain: The Love of Money is a free app that took the top spot on the free chart at the App Store over the weekend. It has since dropped to the third most popular free app, but with over 1.6 million downloads, it’s a surprise hit.

Make It Rain is simple, largely because it was never meant to sit at the top of the app charts. Its creators, a small team called Space Inch, published their app as a simple version of investment games like Clash of Clans, with a cynical twist. The app clearly highlights the corrupting power of money, encouraging players to make bribes and invest in unsavory businesses. As co-creator Joshua Segall pointed out, it’s hard to miss the critical undertone.

“The only way to get rich in the game is to start making investments in things that are illegal or corrupt,” he told Daily Dot. The opening screen is far from subtle. “The love of money is the root of all evil,” it reads, a quote from the New Testament. A Bible verse about the soul-eroding capacity of capital doesn’t seem like it would bode well for the app’s popularity. But Segall and his coworkers are making $50,000 a day off the investment game send-up, making the app’s critical take on money a little ironic. Re/code noted that the app is especially popular among young men, who aren’t typically the target demographic for anti-capitalist satire.

As improbable and unintended as it is, the Space Inch team wants to embrace Make It Rain’s popularity. They’re planning a number of updates. “We didn’t know this game would get so popular so fast.  There’s plenty of work to do to improve it,” Segall said.

Maybe the next update will allow for some more wholesome ways to turn a profit? Then again, Make It Rain lets users embrace their inner Jordan Belfort without actually destroying lives, so perhaps it is turning into an accidental outlet for pent-up greed.