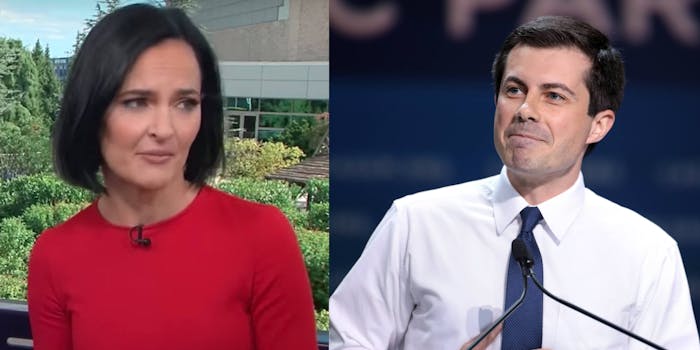 Lis Smith has been accused of posing as a Nigerian man on Twitter to hype up Buttigieg.

In a strange turn of events no one saw coming, Pete Buttigieg’s senior advisor Lis Smith has been accused of running a sock puppet account claiming to be a Buttigieg supporter from Nigeria.

Making the situation even more suspicious was the fact that both Smith and the Chinedu account first denied the accusations within a minute of each other, hours after the possibility of them being one and the same began gaining traction on Twitter.

“Yea guys I totally have the time to be running a sock puppet account from Nigeria,” Smith said. “Find better conspiracies!”

One minute earlier, Chinedu wrote: “I step away from twitter for a few hours and I become the latest Pete Buttigieg conspiracy. Yikes.”

A follow-up tweet from @easychinedu, before the account was deleted, suggests the person behind it was asleep when the conversation began, which folks quickly pointed out would mean that they slept through the day if they truly live in Nigeria.

Adding to the confusion over time zones, a statistical analysis run through TweetStats by one Twitter user appeared to show that both @Lis_Smith and @easychinedu were active at roughly the same times over the month of December, despite supposedly being separated by a six-hour time difference.

However, Smith has continued to fervently deny the accusations, treating this as an absurd conspiracy theory with no merit and sharing a number of tweets from colleagues and friends joking about anyone taking it seriously.

“Can only hope the brunch recommendations from @Lis_Smith’s fake Nigerian burner account are as good as the ones from her real one,” read a tweet from Nolan Hicks and shared by Smith.

“Lis Smith asked me for my social security number and the name of the street I grew up on,” joked New York Magazine’s Olivia Nuzzi. “She said that she needed the information or else I couldn’t have a press credential to cover Pete.”

An investigation by BuzzFeed News supports Smith’s dismissal of the allegations. Reporter Jane Lytvynenko says she spoke to Chinedu, who says he wrote the tweet “from Lis” as a joke.

“I read the campaign email regarding Phase 4 and Lis introduced herself like that (I don’t receive campaign emails just to clarify, I just read one on twitter). I was just having a little fun with that,” he told Lytvynenko.

“Clearly, I am not Lis Smith, that’s the whole point” he concluded.

The Nation’s Annie Shields had previously suggested that a scenario in which a Nigerian supporter of Buttigieg got swept up in accidentally discrediting the campaign was the most unlikely of all options.

“How much damage could a random Nigerian man do to a US presidential campaign he supports just by sending some tweets from a different continent? Turns out a lot, if he’s real!” she wrote.

“The most improbable thing I can think of is that a real Nigerian man with no connection to the Buttigieg campaign could accidentally make thousands of Americans believe he is actually Lis Smith pretending to be a Nigerian man just be sending his own tweets.”

And many remain unconvinced that this “improbably” scenario is actually what went down, namely because Lytvynenko only spoke to Chinedu via a personal email address, something that is just as easy to fake as a Twitter account.

“This is a report of an email exchange claiming to be a debunking,” wrote Leah McElrath, sharing another supposed exchange between Chinedu and Nuzzi. “If it’s not her, it needs to be cleared up. Easy enough to do via phone/FaceTime.”

It is unclear how journalists are getting in touch with Chinedu, as the Twitter account was deleted shortly after it was accused of being Smith’s sock puppet account. Some feel this also calls into question the report that Chinedu is being doxed.

“Wait, he was being doxxed by people who didn’t think he was a real person? And somehow one of the things these people allegedly got ahold of … WASN’T his last name? Literally what do these people think doxxing is,” Twitter user @lesblanchett wrote.

We do know, however, that there is a still-active Instagram account with the same name, and it may belong to a real person named Chinedu living in Italy.

While his Instagram account is private now, one Twitter user claims to have investigated it before it was locked down and saw no references to being a Buttigieg supporter. The account also allegedly was not following Buttigieg or any Buttigieg-related accounts, which may be odd considering the Twitter with the same name seemed to almost exclusively tweet about supporting Mayor Pete.

Ultimately, onlookers remain split between those who think the receipts add up to show Smith, or someone from Buttigieg’s campaign authorized to tweet as Smith, was behind the @easychinedu account versus those who think the whole thing is just an outlandish conspiracy theory cooked up by people with too much time on their hands.

We may never know for certain either way, but each side is determined to stick to what they already believe to be true.